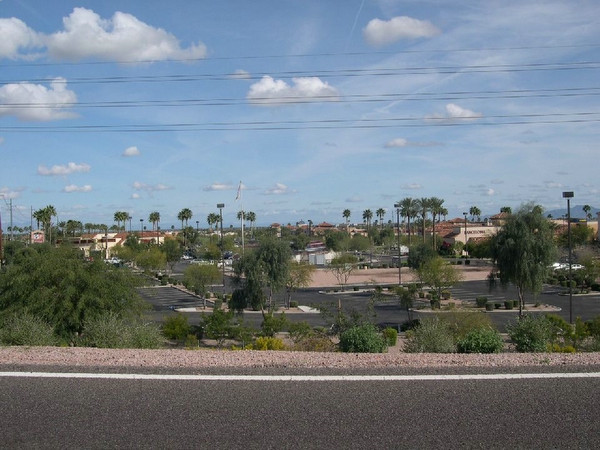 Phew, made it to Tempe! I have limited Internet time here at the Tempe Public Library (which I have to say is super nice, probably even nicer than Boulder‘s, though not as nice as Cerritos, CA’s titanium-walled, shark-infested library), but here are some notes:

First, the drive down here. I took I-70 through western Colorado, and then Highway 163 through eastern Utah, both of which were gorgeous and major surprises. I stayed overnight and did a run at Arches National Monument in Moab, which I will post photos of next week after I return to Fort Collins.

Northeastern Arizona was also a surprise, though not in the best way. First there was the weather, which was terrible! Gauging by the color of the ground, I’d guess it had been pretty sunny here during the winter, but on the day I drove, I encountered showers, pouring rain, freezing rain, hail, snow, 50+ mph winds, and near-white-out conditions.

I also stopped by the Grand Canyon and got some glimpses of it, but just as I arrived at the South Rim it started snowing maddeningly, and thus I could not see anything. Will post photos of what I did see when I return.

The weather only began to clear up about 75 miles north of Phoenix. I camped overnight at Cave Creek Park and completed my journey to Tempe this morning. Unfortunately, I arrived at Town Lake just as it was being closed to Ironman open-water swimmers… darn. Well, tomorrow I will get in my swim practice, and maybe Saturday as well.

Anyhow, about Tempe. Before I came my friend Bill (who will be in the Ironman race also) “warned” me that Tempe is teeming with beautiful women, as in “lots of tanned, blue-eye blondes that go to Arizona State.” It turns out he was not exaggerating.

Also before I came, another friend had told me, “you will love Tempe… it’s just like Fort Collins, being a college town!” Well, this is sort of true. That they are both college towns is correct, though Tempe feels more like one since there seems to be a higher concentration of college students here. They both have lively downtowns with lots of character, and lots of sun. This is about where the similarities end.

Tempe’s downtown is larger and quite beautiful. Green, fully bloomed trees and colorful plants grace the ultra-clean streets of downtown, and there is Town Lake. On the flip-side, Tempe’s traffic and parking are sort of a mess, and downtown is very noisy due to 1) all the jets flying into and out of the nearby Phoenix airport, 2) trains, 3) traffic, and 4) crowds. In look, sound, and feel, Tempe’s downtown kind of reminded me of San Diego’s.

The rest of the town is very sprawling. There seem to be six-lane roads everywhere. For a city that is so dry and warm it is amazingly green however. There are nice desert formations, hills and plants (e.g. plenty of cacti).

Anyhow, that’s it for now. I just talked with Sharon, and she, Bob, and Russ are on I-10 somewhere in the Californian desert and will arrive here in a few hours. Hooray!

Okay, I am back in Fort Collins where I belong. I (and at least one of my friends) came out of Tempe not liking the town as much as when I first arrived. There are a few reasons for this:

Below are photos from the days before and after Ironman Arizona.