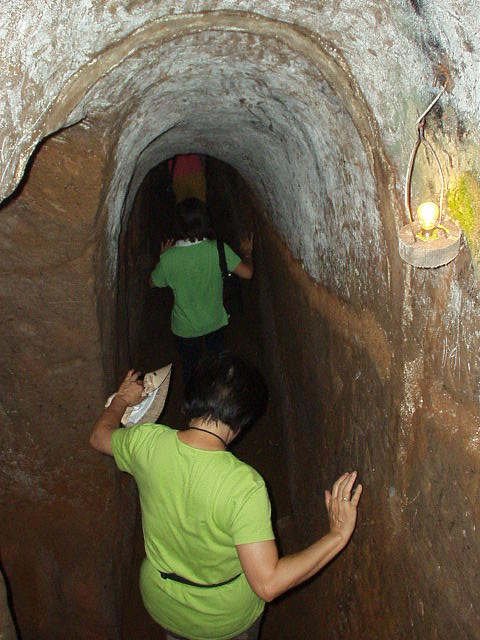 We had crossed over the Ben Hai River—which was the de facto 100km boundary between the former North and South Vietnam—when our tour guide (finally, a good one!) made some passing remarks about being a little boy in this region during the Vietnam (or American) War.

“My brother, uncle, and cousin… killed,” he stated with nary a tinge of lament in his voice, but a look of sadness in his eyes. He then described the effects of Agent Orange, an herbicide dumped by the U.S. army to try to deforest these beautiful lands and blow the North Vietnamese’s cover. “Children today still are born deformed; people still get cancer,” he said, adding that American G.I.’s as well as the Vietnamese have been victimized by the chemical.

So three decades after the end of the war the region we were in—the Demilitarized Zone (DMZ)—was once again lush with forestation and bamboo trees, but reminders of the war persist. The most poignant of them are the people you occasionally see—ones missing a leg or an arm due to landmines that are still killing people in the mountains—but in the terrain, the most lasting are the Vihn Moc tunnels.

These tunnels were dug by the locals as a sort of bomb shelter. Larger than the ones in Saigon, one can walk through them erectly, assuming he is not a 5’10” American. Myself being the latter, I had to do my best impression of a hunchback camel or do the limbo dance in order to avoid smacking my head on the interspersed wood roof supports.

That anyone would have to live down here like a gopher is troubling, but at least it was cooler underground than in the oven under the sun. The Vihn Moc tunnels are the only ones still “habitable” among those dug out during the war; the others had collapsed or were bombed out.

Anyone who wants the slightest sense of the hardships created by war could come down here. Out of the tunnels it was also unnerving to gaze at these sacred lands—lands so lush with such dramatically jagged mountain peaks that they make even the American Rockies and Pacific Northwest look rather mundane—and imagine that once upon a time, not long ago, that my own government (in support of the South Vietnamese) had raided the skies, dropped bombs and chemicals, planted landmines and temporarily destroyed a people’s way of life. And to what end? (Hint: The U.S. lost, the country eventually reunified, and the people despite being led by Communists are seemingly happy enough, especially now that bombs are no longer dropping on top of them and they can live in peace!)

War is senseless, and there is almost always a better way… even if sometimes that means doing nothing. At least that is the initial feeling one gets when he visits the DMZ.