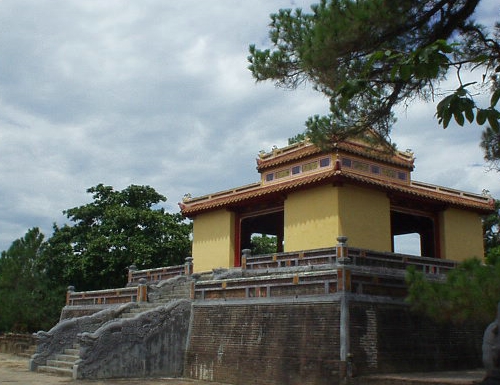 “I am 26, single, and available!” proclaimed the rather cute English-speaking female tour guide to our bus to polite applause. While this was a good start, the tour went downhill from there.

Why is that? It seemed like the entire day was just handing out dong (Vietnamese currency), going into some self-proclaimed heritage site, and then looking at tombs of some dead person whose name I couldn’t even pronounce. Rinse and repeat. After a while, names like Thien Mu, Minh Mang, Khai Dihn, etc. all start looking (and sounding) the same. Come to think of it, so do their tombs.

Not that I could even match up the tombs with their respective people. The tour guide wasn’t the greatest help in deciphering this either, but then again, a simple “This is the tomb of an old Vietnamese emperor… he dead now” would have sufficed. Walking around them and taking photos for five minutes would have also been satisfactory enough, much more so than having us linger there for 45-90 minutes in temperatures and humidity so extreme that one sweated profusely just doing something as energetic as sitting on a bench.

That said, the entire day was not a loss. I got to work on my (woefully lacking) photographic technique. I got to admire (while trying not to get run over by) those delightful motorbikes that are so ubiquitous in this country. The tour ended with a relaxing dragon boat ride on the Perfume River by Hue. Never mind the river smelled like the exact opposite of perfume (or anything sweet smelling), it was okay!

And if you must ask, no, I did not hit on the single and available tour guide; thick Vietnamese accents just don’t do it for me. Sorry to disappoint.