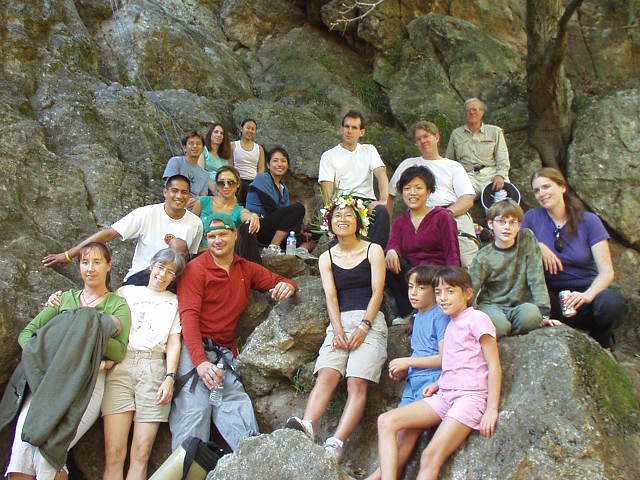 “Congratulations on making it to your 39th birthday!” read a postcard addressed to Stacey Li Collver. “That’s a good way to look at it,” remarked Stacey with a laugh.

Not taking another birthday for granted is especially relevant in Stacey’s case. A few years ago, she was diagnosed with an extremely rare, dangerous lung disease called lymphangioleiomyomatosis (LAM). The condition is quickly fatal with the only known “cure” being a new pair of lungs. Thankfully, Stacey was able to get a lung transplant in 2004. A couple of years later, she is doing well enough to be able to work, rock climb, and do most of the things she loved to do before LAM aside from, say, biking 100 kilometers on a 35-lb mountain bike replete with U-lock and a gallon of water (something she did in 1999!)

A birthday party dubbed “Rock Climbing the Mountain of Youth” at Cragmont Rock Park was held in her honor on Sunday. In 1998, Cragmont was where I scaled a vertical rock wall outdoors for the first time in my life. I was last here in ’01 with my friend Brent and had been looking forward to coming back for a long time.

The party turned out to be at least as fun as if we had spent the whole morning with Big Bird and the Snufflelupagus. When we arrived, Alyssa, Kristian, and Mark had already set up some anchors that Alyssa assured us we would not die on. Then it was time to climb! I ascended only two climbs including a 5.10c slab and a 5.10a overhang, but it was the latter that made my day. This climb—aptly named “Farewell to Arms,” had stumped me in both 1998 and 2001. This time, it felt almost as easy as reaching the second story of the airport terminal on an escalator. I guess my climbing ability has markedly improved in the last half-decade despite hardly having climbed this year…

The rest of the time we goofed around, gave others belays, and had a potluck. People had brought a mouth-watering array of food including a pear pasta salad, whole-wheat quesadillas, roasted chicken, Japanese rolls, potato salad, etc. There was seemingly enough food to enable Nicole Ritchie to recover from her anorexic state in one sitting. Afterwards, Stacey blew out all of the sparkler candles on a delectable chocolate pudding cake with her new lungs.

I especially enjoyed talking with Alyssa, who is super bubbly, does Muhammad Ali-style boxing, and has run the Big Sur Marathon four times! It was also a pleasure to talk with Martha who kindly gave me a ride down to the Palo Alto CalTrain station afterwards.

Alyssa has posted a report and photos of her own, hooray!