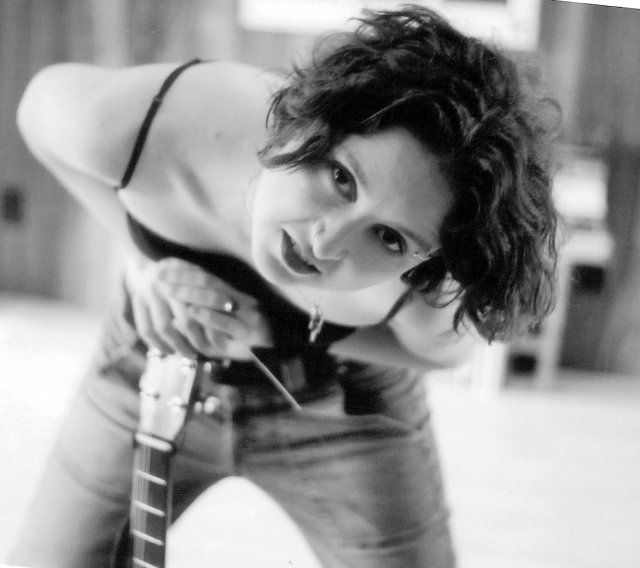 Some days are simply special. And so was this day in the Bay Area, in which I got to climb with Alyssa and Stacey at Planet Granite in Belmont (including making it up my very first 5.12a!); run 8 beautifully wooded miles with Alyssa in Woodside; and bike 13 dark miles to Adam’s home in Santa Clara. As if all of this wasn’t fun enough, then my friend Pin-pin and I went to a house concert featuring one of my favorite singers, Julie Loyd!

Who is Julie Loyd, you may ask. She is often compared to Ani DiFranco, but is more animated on stage (kicking while strumming the guitar, etc.) and her lyrics are a bit less, um, bitter. She also prefers women over guys, but I suppose I can’t blame her. In any case, it was a real treat to see her AGAIN (she came to Fort Collins twice; she said she even recognized me!), and this time, really up close and personal, in the living room of Paul Schreiber‘s house in Sunnyvale, CA.

One benefit of performing in such an intimate venue is that her music was unspoiled by amps, speakers, and other electronic aids. It was just Julie’s dynamic voice and her amazing acoustic guitar. As Julie likes to say, “Just because I’m playing an acoustic guitar doesn’t mean I’m going to be singing about the mountains-and if I am, I’m singing loud.” And though she usually is playing loud and prefers the fast songs over the slower ones, she can sing quietly too (before exploding with heart-shaking volume). As Pin-pin remarked, “She has incredible volume control!”

I was especially happy that she played all of my favorites including The Last Goodbye, The Waiting Room, Tuesday to Tuesday, and Normal. She also played some new numbers I had not heard of before, including nice ballads entitled Birthday Song and Being Home (part of a new personal genre of Julie’s that she calls “changing of the seasons.”) She also played a cover song (“the only cover song I know,” she said), but I forget the title!

Almost equaling her musical talent was her ability to quip jokes along with personal anecdotes about what inspired the lyrics for particular songs, including:

There were also a couple of songs that were inspired by (or mentions) her father. Her dad was a former Methodist minister who eventually quit in the 80s to do some work in the computer industry. “When I asked him why he left the church,” Julie told us, “he replied, ‘You know, I didn’t really believe in that stuff.'” (This elicited laughter from the audience.) “When I was in Salt Lake City last week, no one thought that was funny,” she added to more laughter.

I think she liked us.

hi Felix! so I have to correct a few things you wrote here...first off, ani difranco is quite animated on stage. but maybe you've seen her at a more mellow show than I did. and, she is not bitter, she's just misunderstood :) oh, and not sure if you meant to say she's a lesbian, but that's not true either. she has gone both ways, but is currently with a man. ok, maybe I know just a little too much about her...haha. sorry! ↩ Reply