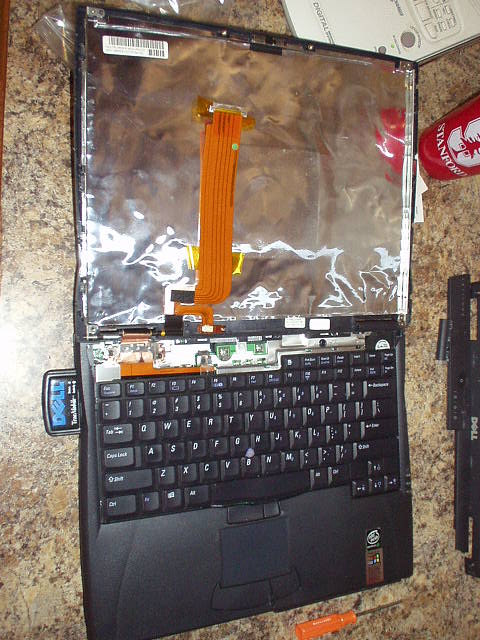 One casualty of commuting in the Bay Area with the Ultimate Commuter Bike 1.0 was my Dell Latitude C600 laptop. Either due to the jolts suffered from bouncing around on the bicycle’s rear rack—or perhaps due to the impact of the laptop, um, falling to the ground while wheeling the bike along in Berkeley—the TFT Screen cracked.

Now, this was a (surprisingly speedy) laptop I had purchased for just $180 a four months ago as a replacement for my broken iBook, so it was hardly a huge financial loss. Yet, it always sucks to have to go out and find another computer, reinstall software, etc. Hence, replacing the screen seemed like the most attractive option. Especially when Dell spare parts are, apparently, so widely available on eBay!

In this case, I ordered a good used TFT screen off of eBay on the early morning of Monday, October 16th, from my friend Adam‘s place in Santa Clara. (Thanks, Adam!) This screen cost $70 + $20 in shipping and taxes (the latter applied since I had ordered it from a guy in Centennial, Colorado, to be shipped to my house in Fort Collins). To my surprise, by the time I returned home on the evening of Tuesday, October 17th, the screen had already arrived! It appeared I would have virtually no laptop downtime at all, if only I could install the new screen with no problem.

The procedure was surprisingly intuitive, straightforward, and dare I say easy! Basically removing the old screen involved prying off 6 rubber pads, unscrewing 6 tiny screws, unsnapping the front screen bezel, undoing 6 more tiny screws, unplugging a ribbon cable, and voila—the screen came right out. Installation of the new screen was just like how they phrase it in car workshop manuals—“the reverse of disassembly.”

I won’t go into a detailed procedure since one can be found here. Instead, the point of this article is to merely demonstrate that 1) breaking one’s laptop screen is not as catastrophic as it may appear, 2) there is no need to pay $280 for a brand new screen when perfectly good replacements are selling on eBay, and 3) you can easily replace your broken laptop’s screen yourself instead of paying some computer shop $65/hour or whatever they charge.