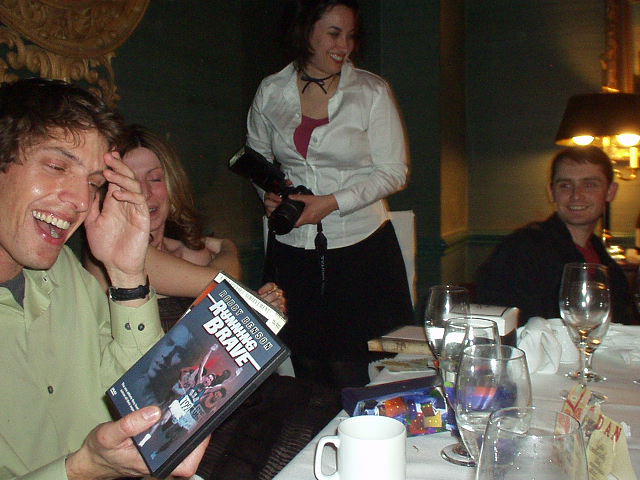 “Hi! My name is Susan,” began the email, “I’m Dan’s girlfriend. He and I have been dating for about six months. We are very happy!”

It is funny, but even though Dan is one of my best guy friends, he has a tendency to not keep me in the loop about who he is dating until, oh, a half year afterwards. Attribute it to not wanting to jinx his relationships or just being a typical guy. In any case, this was great news.

The email continued about how Susan was planning on throwing a surprise birthday party for Dan in Durham, NC, where Dan is finishing up his Ph.D. His family members would be coming from all over the country, and was it possible for me to come on down too? Not having seen Dan in over a year and wanting to meet his family, friends, and Susan, I thought, “but of course.”

It turned out to be one of the best weekends I’ve had all year for many reasons.

First was seeing Sam and Chrissy again along with their funny black cat named (I think) Xanga. Xanga, they assured me, “won’t attack unless you touch or hold it.” Excellent! I made sure to keep a minimum of two feet between the cat and me (or better yet, a glass door) lest I come back to Colorado with claw and teeth marks in my thighs.

Then came Saturday, or the day we were all waiting for to see if we could give Dan a near-heart attack. Arriving at an upscale Mediterranean restaurant named Parizade, 16 of us were whisked away into a back room that could well have been the chefs’ breakroom but was made into an intimate room d’elegance at the urging of Dan’s grandmother Nanna, who had scoped out the place earlier in the day.

Not long after 6:45 p.m.—when we all zipped our mouths—a waiter led Dan and Susan to the room we were crouching like tigers in waiting to pounce. According to Dan—who had been to Parizade a few times and knew its layout pretty well—he was quite discombobulated when it appeared like he was being led to the kitchen. “Maybe we are going to meet the chefs,” he thought.

Of course, waiting for him was not the chefs but a big “surprise!” Shock and awe was more like it. After a big round of hugs, Dan, by his own admission, was speechless for a whole hour and a half as he tried to come with grips that, no, he was not fantasizing and here was his family from all over the country and even his Colorado friend Felix.

After a positively mouth-watering dinner, it was time for Dan to open presents, including a huge mirror that Susan presented. This mirror—custom made by artists called the Stix—featured certain facets of Dan’s life and personality. For example, there was a drawing of Dan running, of he and his mom when he was young and wore glasses, plus some of Dan’s witty slogans including something about a chocolate chip cookie. There was also a hand-drawn picture of a donkey to reflect Dan’s political leanings, though Susan lamented that it looked instead “like a pretty horse.”

Jackass or caballo aside, we all agreed that the mirror was an absolute knockout, something that Dan will treasure for the rest of his life.

The rest of us did not leave empty-handed too, because Susan—as sweet and thoughtful as she is—had gift bags for the rest of us. They contained art, edibles, and other momentos; there were so many things that I am still trying to decide where to place certain art pieces around the house.

During the rest of the weekend, a bunch of us congregated at George’s Garage (one of Dan’s favorite diners) and shared memories of Dan. Mine included the first day I met Dan (when I crashed—and then lost—the Porsche and Dan walked with me in sub-freezing weather for two hours to help me find it) and running our first marathon together. And for good times sake, later that afternoon Dan and I ran 10 miles through the Duke Forest. Not quite as many as the 44 miles in 48 hours he made us run like the last time I was in Durham, but then, heck, it was my bud’s birthday.