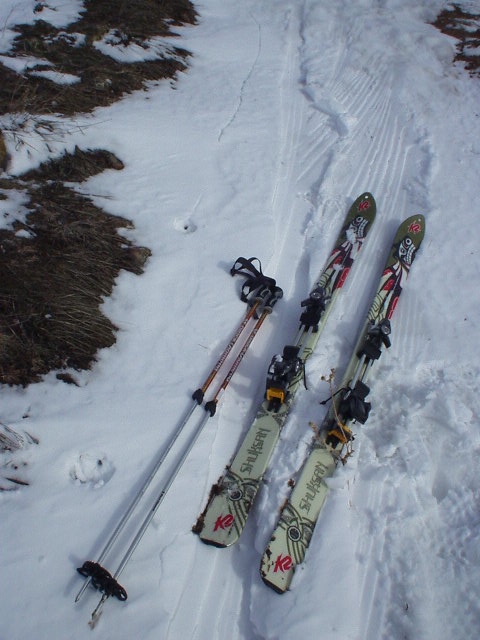 On Friday morning I bolted out of bed and looked out the nearest window. The grass in the back yard—whose yellow and green colors were exposed just a few days ago—was once again replenished with a thin coating of white powder that had accumulated the day before. Many Front Rangers were probably looking at the same snow and rolling their eyes in disgust, wondering when the record-breaking Siberian winter would end. I on the other hand was actually welcoming it.

Why was that? Perhaps this meant that in these waning days of winter, there was one last opportunity to cross-country ski in the mountains no more than 15 minutes west of Fort Collins. I jumped in the car and headed directly to Lory State Park.

I commenced skiing on the West Valley Trail, which runs north-south by the main road through Lory and is pretty flat with a few rolling hills. Shortly after starting, I found my skis slipping sideways as the snow was just too icy. It was hard to get an edge on the skis and I squandered a lot of energy just trying to stay on the trail. In the first five minutes, I successfully traversed about 20 feet.

Things would eventually get better. But not before they became worse! As the trail began to rise, I found myself helplessly slipping backwards despite doing my best herringbone ascension technique and burning seemingly enough calories to power a small hybrid vehicle. Ultimately I unclipped from the skis, hoisted them over my shoulder and hoofed the tricky sections.

I had my moments. This included a 100-foot flat stretch where I was either gliding or striding along in a straight line, enjoying the views of the (still frozen) Horsetooth Reservoir. Then there was a beautiful powdery knoll where—judging by several faint ski tracks criss-crossing it—others had skied before. Well, maybe in January! I went up and down it a good half-dozen times.

After about an hour I was as exhausted as a fighter who had just endured 10 rounds of boxing so I headed back to the car. I tried to remind myself that skiing was invented because it is one of the most efficient ways to traverse snow. Then I completely disregarded that notion and decided that I was much more physically beat than when I went snowshoe running in previous weeks at Lory despite covering less ground.

It’s just as well. I motored out of the state park with the convertible top down, basking under warm sunrays that would grace Fort Collins for a whole hour before 50-mph winds and horizontally flying snow slammed into the Front Range later that afternoon. The sunshine and near-50 degree temps—despite being so short-lived—were indicators that spring is well on the way and that skiing within the city of Fort Collins will soon be totally out of the question. I am so ready.