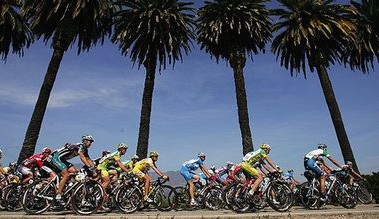 The day has finally come! That’s right, something big is happening in my childhood hometown of Stockton, California, and no, I am not even referring to ghost-riding the whip or the Massive Mall Marriage last week where dozens of “broke and cheap husbands-to-be” were able to get hitched.

Now, at first glance at the city’s local paper—The Record—it would appear that it’s just a normal day in Stockton. For example, these are the top headlines as of February 20th at 11:30 p.m.:

However, buried beneath these articles is a story entitled “Enthusiasts Excited to See Tour in Stockton.” That’s right, Day 3 of the Tour of California has finally arrived in the city that self-proclaims itself as “great… take a look,” and four or five enthusiasts from Stockton may actually turn out and watch.

No, wait—I mean The Record miraculously found four or five people in Stockton to express excitement for the event. That’s actually encouraging considering the city’s traditional bicycle-antipathy. Never mind that of these interviewed cyclists, one had lived in Italy and another in Argentina, and hence are most likely not true born-and-bred Stocktonians.

Indeed, if you scroll down to the bottom of the aforementioned Record article, real Stocktonians left some comments. They give some insight as to how they really feel; for example,

Actually, the comment about bikejacking is quite relevant when you consider this article entitled “Woman Chases Off Potential Bike Thief” that was also published in The Record today.

Apparently, a 12-year-old boy was riding his bicycle when an adult male stole the bike from him. Now, usually in Stockton that would be the end of the story, except this time a female driver driving by asked the boy what had happened, confronted the thief and basically beat him up. Unfortunately, she could not hold onto the robber in time for the cops to arrive so the dude got away, but hopefully getting his ass kicked by the woman will make him think twice about stealing more bikes in the future.

It also remains to be seen if any criminal activity downtown mars the Tour of California on Wednesday. Maybe the same woman will be there to help ward off any mischief; we can only keep our fingers crossed. After all, there’s bound to be some good racing especially up the Category 1 climb up Sierra Road in San José, but that’s only if the cyclists can safely get out of Stockton. Stay tuned!

Update 2/21/07 8:00 p.m.: It appears that every participant was successfully able to escape from S-town unscathed. Congrats to all!