Yes, there is good news for my childhood hometown of Stockton, California—and I’m not even being sarcastic this time. This development has to do with the world of sports and a particularly unlikely athletic event.

No—for those trying to guess—it’s not that the Stockton Bears matched up with the Riveroak Redskins again, didn’t lose and have one of their players manhandled by an opposing coach. It also has nothing to do with hoodlums doing donuts in lowered, bass-thumping jalopies in sideshow competitions either. Instead, it has to do with the 2nd annual Tour of California, America’s premier bicycle stage race.

Why did I lift some eyebrows when I first learned of this news? Well, as any real Stocktonian would tell you, “Roads ain’t for bikes they for cars. Like, duh!” I still have vivid memories of trying to bike through town on an old 10-speed, and despite hugging the shoulder (or even riding slightly off the road) ten feet to the right of cars, almost invariably at some point of my rides a redneck in a passing car would yell out “get off the road!” followed by an expletive.

Yet, Stage 3 of the Tour of California will start from the city more known for its illiteracy than pedaling prowess. According to promotional material,

After a neutral start with parade laps through Stockton’s revitalized downtown area, the peloton will head west through California’s farmlands. Riders will travel through Tracy and then encounter Patterson Pass, a new climb in this year’s race. Following Patterson Pass, they’ll pass through the city of Livermore before connecting to a climb up Calaveras Road. This long, constant grande, which was also used in the 2006 Amgen Tour of California, leads to the most difficult climb of the race, the Category 1 Sierra Road climb in San José. After completing this KOM (King of the Mountains) climb, the peleton will finish the 94.7-mile course in front of San José City Hall.

Stage 3 will be a virtual trip down memory lane for me. It starts in the city I grew up in and ends in the area where I spent my college and post-college years. I have fond memories of grinding up Patterson Pass and the steep-as-Everest Sierra Road during the Devil Mountain Double Century. Calaveras Road was also one of my favorite local training rides.

Of course, questions about Stage 3 remain. For example, will Stockton’s most famous (also most peaceful) celebrity Gus the Happy Asparagus Stalk be present to help advertise the city’s standing as the “asparagus capital of the world”? Or, in order to help attract spectators who would otherwise be indifferent to ultra-fit humans pumping their legs up and down around downtown, will pre-race ceremonies include popular demonstrations such as ghost riding the whip? And will Stockton’s 93 documented gangs and 2,140 gang members even allow a couple hundred spandex-clad bicycle riders to take over the streets of downtown for more than three minutes?

Personally, I am excited by the Tour of California coming to Stockton. Maybe the city’s cyclists will finally get the ounce of consideration that they deserve and bicycles will garner at least as much respect as two scoops of asparagus ice cream. Perhaps Stockton youths will realize that bicycling is a healthy and fun extra-curricular activity and that cycling clubs (such as the Stockton Bicycle Club) could be better alternatives to joining the Blood & Crips. Maybe more people would even think, “Hey, I don’t need to drive my belching jalopy today; in Stockton, where the sun shines a lot during eight months of the year, I can ride my bike instead!”

Of course, it’s also possible that our nation’s obesity rate will start going down, world hunger will be eliminated, and Israelis and Palestinians will finally get along. I’m an optimist, but like the bicycle racers who will be climbing Sierra Road in a few weeks, I won’t be holding my breath. 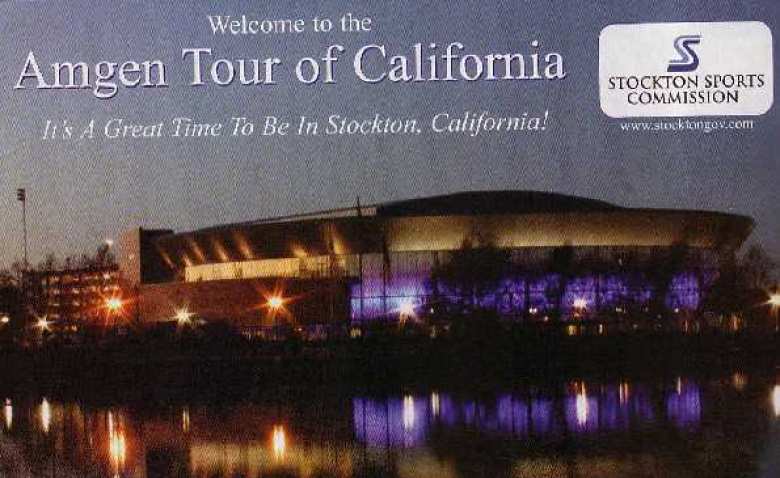