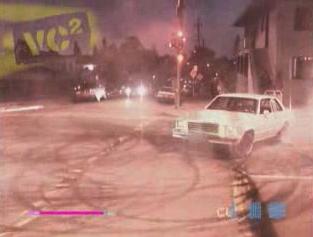 Here’s something in the Bay Area, California, that I am thankful to be far away from: sideshows. I thought 4-5 years ago police had been cracking down on them? Maybe, but apparently with less-than-complete success!

If you have never heard of or seen a “sideshow” before, you can 1) be thankful, and 2) take a look at this onwheelsinc.com video clip sent by my friend Tom B.

In summary, sideshows are gatherings of cars and people (both of which usually look like they came straight from the ghetto) to engage in rile, reckless acts of driving and showboating, including donuts, wheelies, drag racing, and virtually anything that involves burning up perfectly good tires. The cars usually are domestic behemoths such as Oldsmobiles, Buicks, Camaros, etc. from the 1970’s, 80’s, and early 90’s. Oakland is the self-proclaimed sideshow capital of the world but they exist in other towns in the Bay Area (Emeryville, Union City, Newark, etc.) as well as other non-Californian cities, I’m sure.

There were a number of articles in the ANG Newspapers in the East Bay a few years ago about this rather idiotic “hobby,” mainly because people were getting killed. Almost as annoying is all the noise and burnt rubber smells that sideshows produce. Supposedly the police were trying to crack down on this and more race tracks were going to open up where people could drag race legally and safely, but I’m not sure if any of this has happened yet.

There was a time when cars going down the streets were both cool and largely innocuous, such as during the 1960s car cruising scene immortalized by George Lucas in American Graffiti. (If you have not seen American Graffiti, you must! It is one of my favorite movies of all time with the greatest soundtrack ever produced!) Heck, I’d even concede the mini-truckin’ scene of the late 80’s/early 90s was semi-cool, even if those trucks could not clear speedbumps and so much bass was coming out of them that you wondered if Guns N’ Roses had taken over the city and was piping their music through every loudspeaker in the immediate vicinity. At least those mini-trucks had some artistic merit and required some creativity or engineering. Whereas the jalopies doing donuts and making a bunch of screeching noises are not cool (news to the Oakland ghetto boys, I’m sure)…

Over the last five decades we have gone from hot rods to muscle cars to mini-trucks to SUVs and “rice” rockets to sideshow trash. Wow, car culture has really deteriorated, hasn’t it? At least new car manufacturers have been putting out a plethora of stylish fun cars nowadays.

Postscript 1/10/07: It appears that Oakland does not have a monopoly on this juvenile behavior. Apparently, according to articles by recordnet.com, sideshows are thriving in my childhood hometown of Stockton, California too!

Not condoning the sideshows, but they have been going on since the 1980s. Beleive it or not, some of the cars (although few, ARE rare AND up to the six figure range. For what it's worth... ↩ Reply