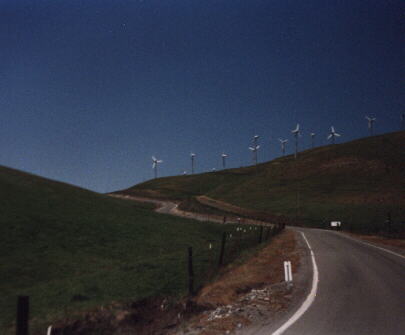 The Devil Mountain Double, with about 18,000 feet of climbing, has the most net elevation gain of any double century in California. Conveniently, the start of the ride was just 20 or so miles from my home in Fremont. Who would have guessed the hilliest double was almost right where I lived?

I arrived at the Marriot Hotel in San Ramon and unloaded Canny from the Porsche just after 4:00 a.m. Registration was inside the hotel, where George Pinney, the organizer of the ride, informed me of two things: 1) Regardless whenever we start, the gates at Mount Diablo State Park (Mile 10) would not open until 5:30 a.m., and 2) to qualify for a course record, one could not start early and must start at 6:00 a.m.

Regarding the latter, I laughed and said, “That won’t be a problem for me” and decided that I’d start at 4:30 a.m.—even if that meant getting to the gate at Mile 10 early.

Leaving with another rider, I stuck to that plan and we rode at such a leisurely pace that the ride could have effectively been 196 miles instead of 206. Yet, I still arrived at the opening gate 10 minutes early, long enough for me to find a bush and make my obligatory fluid contribution to the landscape—and also long enough to cool down completely, as if I never warmed up in the first place.

Finally, a ranger in a Chevy truck pulled up, opened the gate, informed us that “it’s 3300 feet to the top over 11 miles” and wished us “good luck on your race.” I was the sixth person to start up the hill, although several people would pass me on the way to the top. Slow and steady, I thought… must conserve energy.

Half an hour later, the sun broke through the horizon and I was one-third up the hill. I was still pacing myself well and not close to spent at this point. I set the buzzer on the Polar heart rate monitor to audbily warn if my heart rate exceeded 165 bpm. Up the entire hill, it beeped only once or twice.

The reward for the long uphill, of course, was an awesome downhill. There were hairpin turns everywhere, but the road for the most part was remarkably smooth, wide, and free of cars. Perfect for practicing downhill handling skills. This freefall would last for 40 or so minutes.

When it tapered off into San Ramon, we were back in rolling country. Soon we were in Morgan Territory, where there was yet another rest stop. I stopped only briefly as I was still feeling good. I rode for another hour before the windmills east of Dublin were in plain view.

The Altamont Pass was over 3000 feet in altitude. The Hekaton Century of 1996 included this pass, too, and it didn’t seem insignificant. But today, after riding up Mt. Diablo, it didn’t seem like a difficult climb. The next one was Patterson Pass. This was steeper but still not too difficult or long.

Fifty miles had passed, and I was still feeling very fresh. The scenery was nice, as the hillsides of the Altamont and Patterson Pass were still green and the weather just about perfect.

We rode south towards San Jose. Mt. Hamilton, perhaps the climb I feared most on this ride, was still 70 miles away so I decided I had to conserve energy at least until then.

Some of the terrain from Miles 78-116 looked incredibly steep, but I was using the granny chainring for most of it. On some gradual portions, I was going only six miles an hour. At times I’d think I was going way too slow, but the other riders within eyesight were going the same pace. Slow and steady, slow and steady…

Hours passed at this snail’s pace before getting to the lunch stop. Belying the slow pace I was going and the 10 hours on the bike was a feeling of relative freshness, one that was ready for the challenges ahead.

I spent half an hour at lunch, including waiting 15 minutes for the restroom and chowing down a decent chicken sandwich. I stretched my legs and took a couple photos before hitting the road again. The much anticipated Mt. Hamilton was nearby.

The first ten miles were relatively flat with a few rollers. Thank goodness we’d climb only the backside of Hamiilton, which was shorter than from the frontside and started at 2000 feet in altitude, but is quite steep. I kept wondering when the sustained climbing would begin. I’d cross a “cattle guard” and then hit a small uphill, only to be descending shortly again. I wanted to get Hamilton over with.

Eventually, I could see a couple of cyclists above riding out of the saddle at very slow speeds. My speed decreased to 4-6 mph. I pulled out the map. “Five miles of this,” I thought, “just five miles…”

I was actually catching up to some cyclists, but there was one who passed me multiple times. I’d pedaling steadily and he’d ride by pretty easily, but then I’d see him again on the side of the road, just resting. Then when he’d see me, he’d get back on the bike and pass me up again. Hmm, that’s one way to do it, I thought. I stuck with the slow and steady method.

The leap frogging continued for the first three miles. Then, after seeing the same cyclist on the side of the road again but actually lying down, I shouted, “Hang in there… there’s still two miles to go.” The cyclist looked at me and irritatedly exclaimed “No! There’s less than that… way less than that!”

I shrugged and replied, “Less than that? Okay, cool,” and took off.

But then the cyclist got back on his bike again until a SAG vehicle came by. He inquired, loudly, “How far?”

The driver, using external speakers mounted on his vehicle’s roof, relied “about two.” I chuckled but could only imagine the cyclist’s frustration. I never saw him again.

I figured at that point I’d reach the top in about 25 minutes, but with a mile to go the road became less steep. Woohoo! I had just conquered the climb that had been on my mind for weeks.

The descent down Mt. Hamilton and up the Monster

“The descent is long and most welcome, but most riders look entirely wasted by this point,” I recall reading in a ride report from a previous year. I saw very few cyclists to be able to verify if that was true until a number of cyclists passed me.

Usually, I pull all of the stops on the downhills, seemingly able to get in a more aerodynamic tuck that the others, but as with previous descents on this ride, Mt. Hamilton had dozens of hairpin turns. As there were many blind corners, I was extremely careful. I was astonished that other riders were frequently drifting into the other lane and cutting corners to save time.

But the most gutsy move had to be when seven other cars and I were stuck behind a very slow descending pickup truck towing a horse trailer. A couple of riders, being extremely impatient, pulled into the other lane, and blazed right past all of these other cars—a very dangerous maneuver, considering that one could hardly see what was in front of this truck with all of the hairpin turns. I followed their lead, however… and now we were jamming.

Unfortunately, we missed a rest stop and didn’t realize it until overshooting it by 2 miles. I needed water pretty badly, but I was not turning back.

Infamous Sierra Road was ahead. I descended this road one day with my friend Dave in pouring rain, and on that day no one could have paid me to go back up that thing. I called it The Monster because it was so steep with several grades exceeding 15%. It was only today that I realized this was that same road, and I’d now have to climb it.

I employed the slow and steady strategy again. Soon I was grinding away in my lowest gear—32X21—and was spinning at only 35 rpm. I was going about 3.5 mph. The guy behind me on a new aluminum Specialized Allez first tried the criss crossing the road tactic, then dismounted and started walking. He was almost keeping up.

It was only 15 minutes or so before he was out of sight. Then a support vehicle came by, which was extremely fortunate for me because I was completely out of water. After a quick fill-up, it was back to grinding. Fortunately, Sierra Road got less steep at the top.

Finally, I made it! It was the last significant beast of the day. The climb was only 3.5 miles, and yet it took me an hour. What a climb.

Then the road descended to Calaveras Road. This is where I’ve done most of my climbing workouts on the East Bay. It started out with a very steep, but very short climb locally referred to The Wall where I was only maintaining 4-6 mph. I could usually burst up it at 10 mph, but not with 160 miles in my legs. But it wasn’t long before it leveled out. Then it was a splendid tour by the Calaveras Reservoir with sweeping turns. See my review of the Primavera Century for more details and photos on this area.

Here darkness approached and my Vistalight was simply not bright enough. I rode very slowly not being able to see to well. The guy on Specialized bike who was walking had even caught up to me. That was good because he had decent lights and helped light the way to the next rest stop.

With only 24 miles to go, I couldn’t help but feel the ride was anti-climatic at this point. I took off from the rest stop and rode with two guys 45 and 55 years of age.

We got to Palomares very quickly, but it’s totally dark over there. Fortunately, the other two riders had good lights, and I changed the batteries in the Vistalight at the rest stop. The other riders were in great shape despite their age, and I could hardly keep up. I felt the irony of the situation.

“At my age,” one of them lamented to the other in a very casual, conversational tone, “I no longer worry about my times; I just worry if I can finish.” The other one chuckled and concurred, “Me too.”

I, on the other hand, was very quiet, barely keeping up and desperately not wanting to lose these guys who were lighting the way. I hope I will be as in good of shape as they were at their age.

Palomares, which started as a gradual uphill for the first five miles went downhill for the next five. We got some lighting help by a Dodge Caravan support vehicle’s high beams all the way to Castro Valley. Just 10 miles to go. The climbing seemed to pick up a little.

These small climbs seemed trivial at this point. We had done so many significant climbs for the day—many of which took over an hour to climb—that everything after seemed so much easier. Still, I was almost astonished to see the Marriott Hotel at which I started 18.5 hours earlier.

For months I wasn’t sure how I would do on this extremely difficult double century—the hilliest of them all in California in terms of total vertical gain—but ultimately, I got to the finish feeling relatively strong, proud, and happy. I did it!