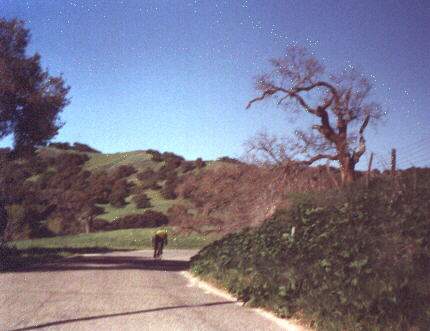 The 1999 Solvang Double Century was my first 200-miler of the year. This was supposed to be an “easy” double century—one I had already done without major problems in 1998—which would help prepare me for the much more challenging CA Triple Crown Stage Race events. Initially it was going to be a double I would ride with a friend as his first 200-miler, but he had to bail at the last moment. So I thought I’d try for a new personal record and break the 14-hour mark.

The night before I drove the 300 miles down to Lompoc, where I would have an excellent-but-inexpensive Thai dinner while studying for the Fundamentals of Engineering Exam. By the time I was finished it was already past 11:00 p.m., just four hours before I planned on waking up to get ready for the ride. But I spent another 30 minutes on the phone with a friend, and then had only 3.5 hours to sleep.

By this time it was pointless to get a motel room, so I just snuggled up in the 944, right in front of the Inn of Lompoc—the start of the ride. I woke up at 3:00, registered, changed into cycling clothes, etc., and by 4:00 I was standing in a long line to be checked out as this was a timed event.

I actually was only able to get started at 4:30 due to the long line, but that was okay as I’d rather start mid-pack and be passing people instead of starting at the front and have everyone passing me up. I joined a group of eight riders who were going a leisurely pace through Lompoc.

But not for long. Turns out they were just warming up. Soon we were keeping a steady pace of 22 mph, which was not time-trial pace, but fast enough to be passing scores of riders. I was feeling good and pleased with our time. After 28 miles, my average speed was 19.1 mph.

I stopped only for a few minutes at the rest stop, and was off and running again. Now I would be riding mostly alone, as there seemed to be far less riders on the road. My pace was far less frenzied than during the first leg of the ride, but I was still feeling good if a little thirsty. Despite all the water I would be drinking in the next few hours and all the times I had to use a Porta-Jet, the sensation of thirst never really went away until the evening.

The rolling countryside north of Solvang was semi-green, but not as lush as I remembered from the year before. Unlike last year, the skies were entirely clear and the bright sunlight washed out the surroundings. It wasn’t as pretty as last year. But at least I was dry.

A few miles before the second rest stop, the winds picked up. It traveled south, exactly the opposite direction we would be travelling until we got up to Morro Bay, the turnaround point of the ride. At the time I couldn’t remember from the year before when we would start going in the opposite direction, but was hoping it would be around Mile 125 or so. It ended up being at Mile 140.

During those miles, I was averaging only 10 miles per hour. The terrain was not especially difficult—a very gradual uphill at best—but the winds were unrelenting. They made my eyes water and its incessant howl had a demoralizing effect.

Canny, my faithful road bike, was not helping either. The week before I had got her a beautiful Campagnolo Racing T Crankset to replace her old 13,000-mile Shimano RX100, and thought that had eliminated all of Canny’s creaking/clicking noises under load. To my dismay, the creak/click was back, as loud as ever. Where was it coming from? It was annoying.

My body was breaking down and so was my mental state. I kept trying to convince myself that the strong southbound winds meant a fast return to the finish when we turned around. There was a particular moderate uphill grade which put us right in the brunt of the airstream, and I was barely managing 6 mph.

Other cyclists seemed to be faring better. I stopped a number of times to try to regain my senses before finally reaching the turnaround.

I got to the rest stop right before Mile 140 with a tailwind. But I was still struggling and my mouth was still very dry. I kept chugging water, and my bladder would fill very quickly, but my body did not seem to be absorbing any of it. I suspected I hadn’t been ingesting enough salt and other electrolytes, which would aid the absorption of fluids. So I spent 15 minutes at the rest stop having one of those Maruchan Instant Lunches (noodle soup) and a banana. Their effect was not immediate, but eventually I felt better.

When I left the rest stop, it was almost 3:00 p.m. Just over 60 miles to go; could I finish by dusk? Clearly, a personal record and a 14-hour double were out of reach now, so I set a new goal: to finish by 7:00 p.m. It would mean having to average more than 15 mph—faster than I had been riding the the last few hours, but with the new tailwind? Very possible, I thought.

The rest of the ride mostly went through Morro Bay, San Luis Obispo, and then the coast on Highway 1. The tailwind and descents were great. In my previous training rides I had made a conscious effort to spin quickly but lightly (say, 115 rpm) on these downhill sections to aid recovery of my legs, but for this ultramarathon ride, I merely tried to conserve energy. I got in an aerodynamic tuck and did not pedal at all, letting gravity do most of the work. I was actually passing a lot of cyclists by doing this, although they passed me on the ascents. I could have pushed harder, but I was content with my progress and was averse to fatiguing the body even more.

The tailwind provided a boost the rest of the way except on two climbs. One was right after taking the Lompoc Exit off of Highway 1. The other one was the steepest at Mile 190. Because I was familiar with it, I conserved energy and resolved that I would just gradually go up it, not pushing so hard as to screw up my back or ankle as I did last year.

But ego prevented me from using the granny chainring, which I avoided using the entire ride, and hence was climbing in the 42X21 gear. Consequently, everyone was passing me here, and I couldn’t even keep up with a recumbent. But I knew the steep climb wasn’t more than a mile or so, and that I would eventually make it.

And after the climb was a glorious downhill. I caught a lot of the riders, including the recumbent, who had passed me on the climb by maintaining a super aerodynamic tuck. With less than 15 miles to go I was confident that I could make it back before 7:00 p.m., but to make sure I would, I started cranking pretty hard in the big ring. No one passed me anymore.

My mood further improved after I exited Highway 1 and sped by the U.S. Penetentiary. The end of the ride went through some residential areas in Lompoc and the lights of downtown Lompoc were clearly visible.

Finally, five minutes before 7:00, I rolled into the finish.