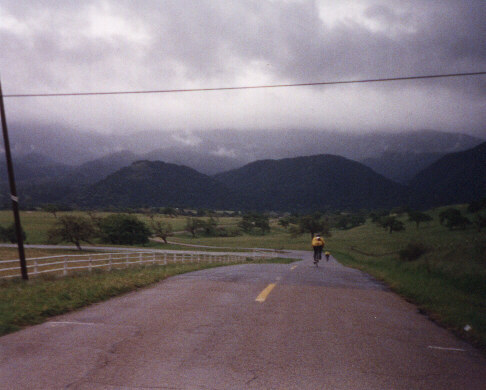 It’s a new year and time for another double century. Months ago I had decided that I would attempt to complete the California Triple Crown for the second year in a row. But this year, having learned from the experiences of 1997, I would try things differently. As in:

I also wanted to finish the Solvang Double Century in a record time for myself. Last year I could not finish in a time close to that of my first 200-miler, the 1996 Davis Double Century, despite three attempts. Moreover, I did that ride back in my junior year of college, and I wanted to prove to myself that I am in better shape than then.

The Solvang Double was an optimal ride to accomplish that because of its relatively flat terrain and cool temperatures. Also, later in the year I would be riding the Davis Double with a friend and just trying to finish the really difficult Terrible Two (post-edit: I ended up riding the Eastern Sierra Double instead)—so this was to be my “fast” ride.

Prep time for Canny was minimal due to not getting any new equipment this year besides a shiny new Italmanubri Eclipse stem, which was 12 cm long as opposed to the 13 cm one that my friend Omar lent me for several years. This year I also used regular butyl tubes instead of the flat-prone ultra-light ones.

A quick cleaning was all I had to do on the Thursday night before the ride. On Friday I even left work early—2:30 p.m.—since I wanted to arrive in Lompoc at a reasonable hour (see goal #1 above) while having some time to do a little sightseeing en route.

Lompoc was less than 300 miles, so I had some time to snap some pictures along the coast. I drove up Highway 17 to Highway 1 and stopped at the Marina Dunes for 45 minutes. What a splendid place for a hike, being right next to the ocean, with great views, hardly any other people, and majestic flowers all over the place.

It had stopped raining by this time, and even though it had showered pretty much the entire day, I wanted to drive by the coast in style. So I put Goldie‘s top down. That turned out to be a bad call because near Monterey it started raining and then pouring. I actually didn’t get wet while cruising at 60 mph, but within Monterey, there were stop lights. But with my squeegee to wipe off the interior side of the windshield, and my Stanford cap to keep rain off my glasses, all was okay. But I’m sure people were looking at me and thinking, “What kind of lunatic would drive with his top down in this kind of weather?”

Unfortunately, Highway 1 was closed south of Monterey to San Luis Obispo due to flooding. I had to backtrack and take a detour to Highway 1… this made me recall the 120 pointless miles near Yosemite en route to Death Valley last year.

I got to Lompoc by 10:00 p.m. and found a Motel 6 only two blocks away from the start. So I checked into a room and slept for 5 hours—not bad.

I got up at 4:45 a.m. and looked outside… it was cold with a slight drizzle. So I wore two jerseys, cycling shorts, tights, ear warmers, arm warmers, two pairs of socks with plastic bags in between them, and cycling gloves. Still a little cold, I rode over to the Inn of Lompoc—the official ride start—in a jiffy. I stood in line with the other riders to get our numbers bar-scanned, since this was a timed event. I departed at 5:50 a.m.

It continued to rain in the morning for a few hours, but I managed to stay relatively warm and happy. The rain actually added to the prettiness, so I didn’t mind. It tapered off in the afternoon, and then it became sunny and not hot.

Hugh Murphy made it clear that there would be no pacelining or riding 2-3 abreast, so most riders were riding solo. This actually made the ride a lot more relaxing and meditative. Directions were clear, although I did miss one arrow and got off course by 3 miles.

Canny operated virtually flawlessly with no mechanical problems. I would have no significant injuries; only a little pain in both ankles towards the end of the ride. Fluid intake was definitely not a problem, but I had to make a potty stop at every checkpoint. This was a welcome contrast from the Davis Double where I did not have to go to the bathroom once despite drinking a water bottle an hour.

The scenery was great and terrain only moderately hilly, with the biggest climb coming at about Mile 188 along Highway 1. In other words, an uneventful, but very enjoyable and pretty ride.

The route at the end passed by the famous Lompoc Penitentiary before returning to the Inn of Lompoc. At the finish awaited a friendly staff serving some excellent vegetable soup. I start up conversation with a friendly Berkeley grad who gave me advice on graduate school. Unfortunately I forgot her name.

Driving back up to Fremont, there were a lot of places to stop at, like Pismo Beach, the San Luis Obispo Historical Museum and Mission, and Atascadero. I even ran into an old acquaintance from Stanford 20 miles south of Gilroy at an In-n-Out burger joint.