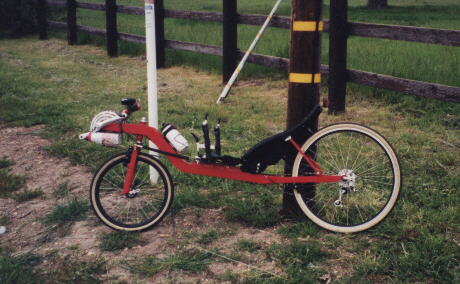 Here are excerpts from an email I wrote to a friend that gives some insight as the Reynold Wishbone recumbent’s performance during the 200-mile ride. In short: awesome.

I rode the recumbent for this ride, and my goal for the ride was to finish in better time than during the 1998 and 1999 Solvang Doubles I did on the Cannondale, which I finished in 14:10 and 14:25 respectively. This might have seemed somewhat far-fetched considering I still have not put many miles on the ‘bent and even abandoned Death Valley after 151 miles, but I knew this course had only moderate climbing and the weather would be near-perfect. I started the ride late, just after dawn and way after everyone else had started, but started catching people after Mile 60 or so. Actually, I rode the first half somewhat conservatively, well within my limits. I put the hammer down after Mile 90 or so, and was jamming. The result:

I couldn’t believe it; this even surpassed our 12:57 on the Davis Double, Dan, and should be good for a top-20 if not top-10 finish (out of 350 participants or so). And I could have easily come in under 12 hours if I didn’t get lost 5-6 times. The ride was not marked this year at all and we actually had to use the map every 10 minutes. Support was pretty poor—e.g., no water at lunch—but man, what a fast ride.

The recumbent was super comfy and stable at speed and because it was so comfortable I only had to stop a few times for a few minutes each during the ride. I still am not a great climber on it but on this ride, its better aerodynamics more than made up for it on the flats and downhill sections. I also was feeling very strong and surprisingly felt in better shape than I did last year, maybe because of the 151-mile and 112-mile rides last month.

I’m debating whether I will do the super-hilly Devil’s Mountain Double in April, considering my climbing needs improvement.

Hi! I have a reynolds nomad, my frame looks a lot like yours, can you tell me if they are the same? I also have a reynolds round tube wishbone and a z-bone. I wonder if my nomad can become a wishbone? Have you ever considered running a 700x23 wheel on the front? I ask because the height from ground of the seat and the down pedal are almost identical to the z-bone. The z-bone is the fastest of the 3 for me. I use velocity sparatus wheels and real design 1365 gr per set wheels. I did change the rear nomad wheel to 700x23 real design.