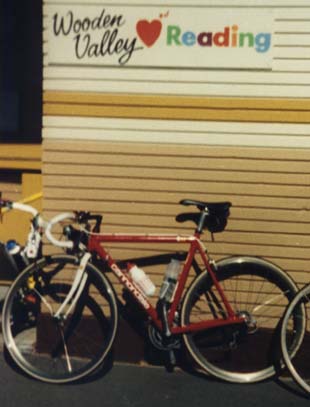 The Foxy’s Fall Classic was my first and only 100-miler of the year. Initially I thought it would be a walk in the park considering I had already done three 200-milers in 1997. But I was looking forward to the ride as it would allow me to visit a friend in Davis and ride with my traditional cycling partner, Ken Loo.

Before this ride I got to sleep a few hours, and it wasn’t even in the MGB. In fact, I slept in Ken’s frat room while he snoozed in the fire department where he works.

I also felt well prepared for the ride for once. Although the last substantial ride I did was the Grand Tour after graduating from Stanford in June, I’ve been diligently riding hills to work via mountain bike nearly every day and taking out my race bike for more hills on the weekend. At the time I felt strong, confident, and in the best shape of my life.

The Start to Mile 25

Ken and I left Oak High School promptly at 7:20 a.m. We rode together for about a block until I realized my heart rate monitor was not registering any heart beats. It was not exactly an auspicious start. Its battery must have been dead. Either that or I was. I finally decided that I am very much alive despite the zero heart rate reading and that I should just take off the HR transmitter. It wasn’t gonna help me this time.

“Ken, I’m gonna take off my heart rate monitor strap and stash it in my car,” I yelled. “Go on without me… I’ll catch up.”

So, like a testosterone-crazed guy without a heart-rate monitor to beep out “slow down, stupid,” I went into time trial mode and was soon going over 25 mph and passing everybody. This included not just leisurely individual riders but entire seven-rider pacelines. Funny how confidence can so quickly turn into cockiness. Hey, this is only a 100-mile ride.

But just as quickly as I whizzed by another paceline, its riders decided “let’s latch onto this hotshot” and I found myself pulling an entire train. Finally, but only after another 10 minutes of this, I began to realize that I really didn’t need to be doing all of the work so I finally pulled off and let others do the leading.

We were still going 21-24 mph, but where was Ken? Twenty minutes passed, then 30 minutes, then 40, and finally… there he is on his Cannondale. He would later say he was surprised I caught him at all, but I was surprised it took so long. We were jamming.

Ken briefly joined our paceline but drops off I-don’t-know-when. By the time I got to the first rest stop (25 miles from the start), my speedometer read an average speed of 21.5 mph. This includes the “walking pace” time spent around the high school. Phew.

Ken arrived about 10 minutes later. He said, “When my speedometer read 26 miles per hour in that paceline, I thought, ‘Forget it. I’m reserving my energy for the later parts of the ride.'” Always a good pacer, he would later prove the wisdom of such thoughts.

We got rolling again 20 minutes after I first arrived at the rest stop. My legs got really tight due to the long rest stop; during double centuries I almost never stopped more than five minutes. But the soreness would go away, I thought. Ken and I rode a few miles together until he told me to “go on ahead.” We weren’t exactly going slow—16 mph—but compared to what I was riding in the first 25 mph, it seems a little sluggish. So eventually, I did pick up the pace.

But my early form never returned. I rode out of Ken’s sight pretty quickly, but almost just as immediately my speed fell back down to 16 mph. Should have stayed with the guy. I was feeling pretty lethargic.

But the next rest stop came at 45 miles. It couldn’t have come at a much better time because I was hungry. Ken arrived a mere 5-10 minutes afterwards. He had a good story to tell.

“You wouldn’t believe what happened to my pump,” he said. He showed me his tire inflator and its handle is missing. “It just came off when I stopped to help a guy with a flat,” he added. Oof.

I then noticed a problem of my own. The rear brake was rubbing against the rear wheel such that it wouldn’t spin even one complete revolution freely. Doh. I wondered how long this had been occurring. At least it’s easily fixable.

We hung around for a little bit and left after a toilet stop. This is when I realized I hadn’t been drinking nearly enough, especially during the first 25 miles when I was concentrating on keeping up my speed. “That’s not good,” Ken says, “you should be drinking a water bottle an hour.” I know this, but I seemed to have forgotten all of my cycling knowledge and had a cavalier attitude about these things.

A sign at the rest stop says, “Warning: the next 20 miles ahead are very hilly.” It’s Cardiac Hill. I made a joke about it to Ken. Hey, this is Davis, I said, it can’t be so hard. “No, I did it last Sunday and it’s definitely not easy,” he said.

We started off together, really conservatively. Remembering miles 25-45, I resolved to stay with Ken, while at the same time not using my granny chainring. But, this meant spinning at a very low pedal cadence, since we were going pretty conservatively. My gearing was too high for this speed.

So again Ken urged me to go ahead and, wanting to spin a lot faster, I did. So far nothing looked really steep. Up one hill. Then two, and three. There were lots of flats sections to rest. So far, so good. But suddenly, I felt a sharp pain in the side of my knees, and I realized just how dry my mouth was. Dehydration set in.

I snatched my water bottles, and within two minutes I used up almost all of my water. There were still 15 miles to the next rest stop, too. I knew I hadn’t been drinking enough but it wasn’t until this moment that I was fully aware that dehydration is real. Suddenly, my cockiness suddenly turned into apprehension. Here’s a real problem.

“Felix, try to hang on to this paceline,” I heard Ken yell. He had caught up to me by now. I was on for about 10 minutes but there was really nothing in me that could get me up another hill with any speed. And then there was another one…

“I’m really feeling unwell,” I told Ken. “Use your granny,” he advised. Apparently, he has noticed my prejudice against such low gearing today. I finally conceded and dropped the chain to the third chain ring. But it’s way too late at this point.

Now, everyone was dropping me and, before Ken took off on his own, he gave one piece of advice: “Remember to pull up and back on the pedals.” Actually, that’s virtually all I concentrated on while climbing, but there was nothing in my hamstrings or quads. Heck, I couldn’t even push down. I was probably going about three mph, and even riders on ponderous mountain bikes were whizzing past me now.

The next 15 miles were a struggle. My water was all gone, and I was hardly able to stay upright on my bike. Fortunately, the end of those miles were slightly downhill. And at last, I arrived at the rest stop.

“I’ve been waiting here for 15 minutes,” Ken says. He was pleased that he actually felt very good on the hills. But all I could do is go to the nearest water outlet, and quickly chuck down two 27-ounce water bottles of water. Relief.

He then reiterated the benefits of using the granny gear and how I should have used it. I explained that even in the hills around Berkeley a granny gear isn’t necessary, and that the hills we just did really were gentle grades, but I knew he has a point about “making the most of your equipment.” Funny how during the entire ride I forgot all of the cycling knowledge I had accumulated over the years: pacing, drinking before you’re thirsty, using higher cadences, etc.

I think I know what I’ll be doing over winter: going back to the basics.

Within ten minutes I was feeling like a new man. It’s amazing what three pounds of water can do so quickly. Astonished by how miraculously I recovered, I was able to ride the rest of the ride with Ken and others.

We were riding in an efficient paceline, going about 17 mph. During this last part of the ride which was uneventful, Ken reflected on one unique aspect of this particular ride together.

“You know, this is the first century we had no mechanical problems.” Almost! His pump broke, and during the entire ride my rear derailleur/chain were making squeaky noises in some gears. My front derailleur dropped the chain twice. Not to mention the rear brake was dragging along the rim during the first half of the ride.

But the thought of having no mechanical problems sounded nice, and is something to aim for in our next adventure.