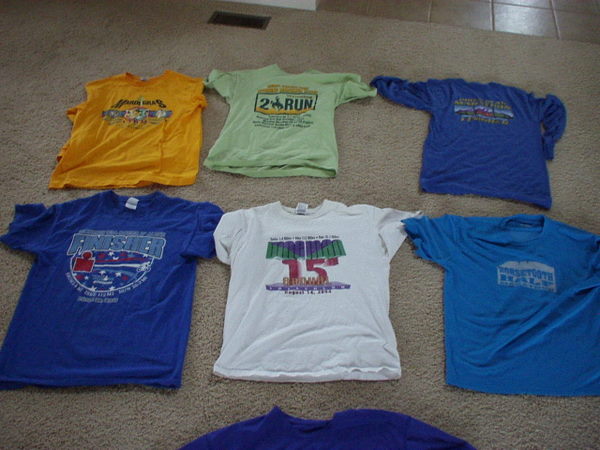 This weekend many Northern Coloradoans probably were enjoying the beautiful weather outside and going camping, having BBQs, or watching the Indy 500. In contrast I performed another Memorial Day ritual: cleaning out the house!

Or at least, the clothes closet, which was an utter disaster of near-Katrina proportions. One reason for this is there were more T-shirts in there than hangars. Most of these T-shirts I never even wore more than once or twice, if at all. Hence they ended up just being thrown onto a shelf, wrinkles and all.

You may then ask, if I have so many shirts, why did I even buy them in the first place? Well, let me assure you that I didn’t! In fact, I loathe clothes shopping so much that I don’t do it more than twice a year, which could explain why every time I go out for a jog, I have to do so with holes in my socks.

How, then, did I acquire so many T-shirts? In a word: races. Specifically, running races. For some reason, at almost every organized run (i.e. any run you pay good money for), you get a “free” T-shirt. It doesn’t matter if the race is something as trivial as one mile or 5km, you get a buttonless, collarless shirt that my dad likens to “underwear”.

How running came up with this tradition is beyond me. I played “organized” T-ball and soccer as a youth, and I don’t remember getting anything other than multiple kicks in the shin. (Then again, we always lost.) At bicycling events such as centuries, you usually don’t get a jersey—instead, you get an iron-on patch. (If you wonder what cyclists do with these patches, it is simple: they toss them in a drawer!) At vintage auto shows, participants might get a 1X4″ dash plaque, which a few car enthusiasts actually do put on the dash of their vehicles.

But organizers of runs seem compelled to give something away of their own (after jacking up the registration fees accordingly), so they give a T-shirt. The shirts usually in some gaudy color with some boastful words (“MARATHON FINISHER”) in order to help mitigate the fact that once the runner actually puts on the T-shirt, he instantly becomes worse-dressed than Jeremy Clarkson of Top Gear.

At least Colorado running events have recently been giving away shirts made of technical, moisture-wicking fabrics such as Coolmax instead of the standard sweat-sopping cotton fare. Then again, the Coolmax shirts make much worse rags. Which used to be one of my primary uses of the shirts.

Anyhow, so to make the closet look less like a hurricane zone, I threw all of those unworn T-shirts into a bag which the Vietnam Veteran Association gladly took off of my hands and threw into their big white truck in exchange for a tax-deductible receipt. Now, whether the Vets (or people who frequent their stores) will want the shirts either is beyond me, lest they look like poseurs for not doing the race the shirt says they were a finisher of.

Here’s an idea to the race organizers out there: offer a “no T-shirt” option and lob $5-10 off of the registration fees. Or offer something else, like socks. Now, I could use a pair of those.

Pick out your favorites and make a T-Shirt Quilt out of it. Only keep the ones you love. Give the rest away to a charity. I'm a professional organizer and love to help people get organized. www.lesmess.com ↩ Reply

The Horsetooth Mountain Trail Baker's Dozen and 8 Mile trail run (this coming Sunday, 6/10) has a no-shirt option for $10 less.

In fact you should run this race, it's a good time! ↩ Reply

As bad as this sounds, if you would like to sell some of your older (80's) shirts please let me know. I am a runner but enjoy the comfort of older race shirts - the 50/50 feel. Most of the shirts I have acquired are all cotton and haven't seen enough washses yet. Please take the time and let me know if you are interested.

I too donate mine to Goodwill, in fact most runners that I know do. It's odd that I don't see more Bums wearing local race t-shirts, the Goodwill/Salvation Army stores should be flooded with them.

On a side note. In High School, a pastor talked to my class about a recent missionary trip he made to Africa. He starts showing us pictures from his trip, in the background is this skinny African kid with a shirt that read "Spoiled Rotten", obviously a hand me down, albeit a funny one. ↩ Reply