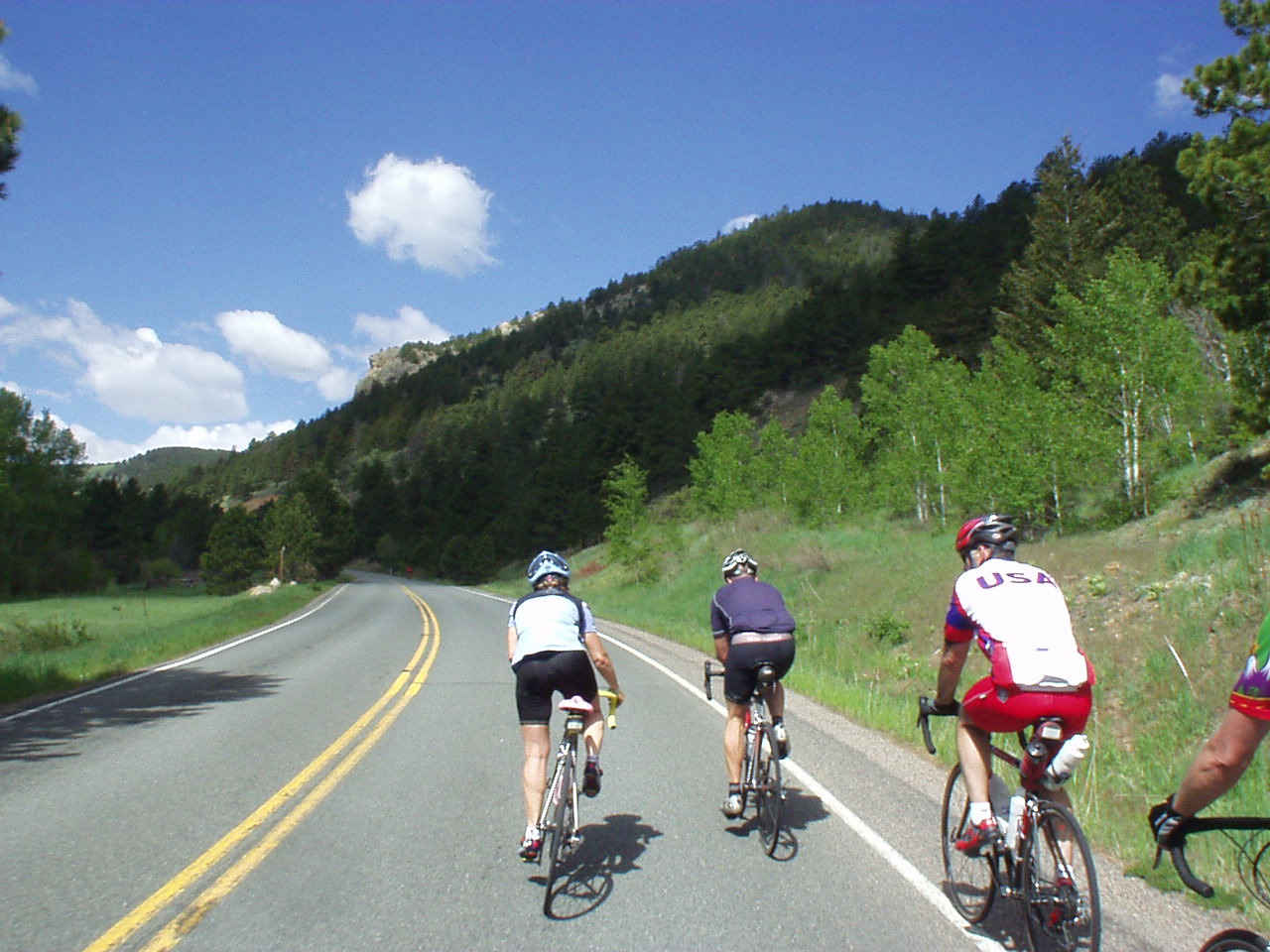 Riding a bunch of “extra-credit” was something I was absolutely intent on not doing since doing just that in my last brevet two weeks ago. Unfortunately, I did not have a mantra for other issues, and like last time ended up:

There was another major problem early on: being so cold that at one point I was seriously thinking about turning back. Fortunately, I stuck with it, made it to the first check point where I hastily purchased and chugged a caffeine-laden Pepsi (resorted to cola after just 37 miles; for shame!), and encountered Beth and Brent who voluntarily towed me all the way to Lefthand Canyon while talking with me. The Colorado sun also emerged from its beauty sleep and the cold ceased to be a problem for the rest of the day.

Beth and Brent stopped at the beginning of Lefthand whereas I—now fully wake—soldiered on, leaving me to do battle with the local Boulderites who were here to do a weekend training ride.

A good number of them were putting down the hammer, and feeling astoundingly strong at this point, I ended up passing and leaving behind several of them! “Not bad for having ridden 72 miles already,” I thought.

Unfortunately, two miles from the summit of this 17-mile, 4000-foot climb, the gradient got steeper, and I cracked. I even stopped to take another swig of Pepsi, although admittedly, I also did so to chat with a shapely Boulderite who had pulled off the road about twenty seconds in front of me.

“Do you know how much further it is to the top?” I asked her.

The summit did come in due time, and feeling relieved, tired, and elated all at the same time, I did something at the next checkpoint (the Mill Site Inn) I’ve never done before during a ride: sit down inside a bar, relax, and order a plate of banana creme pie. I took the time to savor its sweet flavors, taking precisely four minutes to consume it. Spirits back up, I left a tip for the bartender, saying on the way out,

“That was one of the best pieces of pie I’ve ever had in my life.”

The next twenty or so miles comprised a spectacular descent surrounded by regal pine trees and views of snow-capped mountains. This was world-class riding, and I could see why so many international pro cyclists come to Boulder to train.

It’s too bad, then, one of my earlier problems of the day—a hard time staying awake—came back to haunt me. As I descended at 35+ mph, eyelids weighing heavily and feeling more lethargic than a midnight couch potato, I decided it was time to stop. Momentarily, at least—to take a nap!

So there I was, at Mile 100, 20 feet off the side of the road and setting my watch timer for 12 minutes. I crouched on the ground and rested my head in my arms, dozed off for a few seconds, only to be awoken by the voice of another cyclist yelling “ARE YOU OKAY?” Instantly I realized it was going to be impossible to sleep unless I was hidden from view, so walked down even farther and lay down ten feet below the level of the road. With tall trees shading me from the sun and sheltering me from the noise of the open road, there I slept, a quality 9 minutes—and never felt sleepy during the rest of the ride.

The descent was great, but the subsequent climbs around Carter Lake in Loveland were relatively tortuous.

It also didn’t help that I didn’t see another cyclist until the Carter Lake checkpoint, in which two cyclists—Bill and Stacy—I had met in the last brevet arrived just about as I was ready to leave. We got to talking, and at one point Stacy mentioned how we were now in familiar territory to her.

“Me too,” I said, noting how in 30 miles we’d get within three miles of my home in Fort Collins. At which point she asked, “What part of Fort Collins?”

It turned out Bill and Stacey were from Fort Collins too. “Funny how it takes riding 150 miles to figure out we live two miles from each other,” Stacy said.

And so us Fort Collinsers all rode together through our favorite lands, through the Fort and over to Wellington, where I drifted ahead. My legs were now fully recovered, and it was time to head south to the start/finish of Louisville over some flat and tailwind-laden lands.

Through the plains east of I-25, I was making good time. That is, until the sun disappeared and it started to… rain.

Unfortunately some of this riding (including a seven-mile stretch on Highway 66) was on heavily trafficked roads, which did not make for a pleasant riding experience even though the shoulder was really wide. “I really hope,” I thought to myself, “that I do not get a flat here,” noting that on the shoulder was a lot of debris.

As more and more time elapsed I started to get more and more anxious. 10:00 p.m., 10:30 p.m. Finally, 10:50 p.m.. a sign for Louisville! Now it was just time to find the Comfort Inn where my car was parked and the ride would officially end.

At 11:09 I rolled into the parking lot where I was greeted by a customer smoking a cigarette. “Hey, isn’t it dangerous to be riding out this late at night?” he asked.

“The last couple of hours felt like it,” I conceded, “but I just rode 250 miles.” I then noted how if I had stopped a little less, hadn’t needed to take a nap, and rode a little faster, I could have probably made it here just as the sun was beneath the horizon. That will be my goal for next time.

Also, to stay on course again all while avoiding some of the sleepyhead/morning issues.