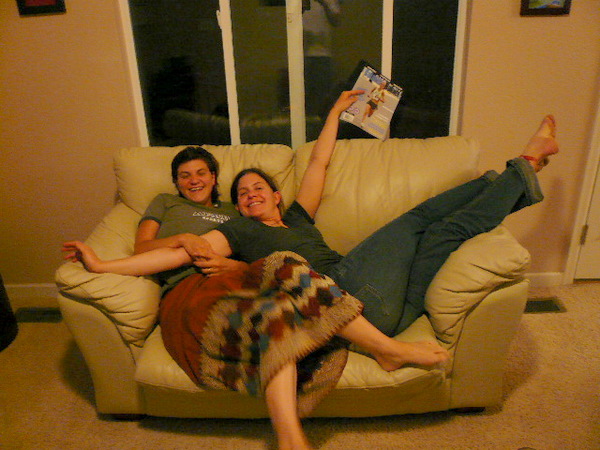 The weekend was eventful to say the least. A brief synopsis:

First, I rode my bike in the RMCC 400-km (250 mile) brevet. This took 19 hours, finishing in Louisville (Colorado) just after 11:00 p.m., and getting home at 2:30 a.m. (since I had to take a nap in the car 20 miles from Fort Collins.) But did I go to sleep right away? No! Because then I decided to assemble a new bed frame that was delivered to my door last Friday, and then snooze in it.

That resulted in, oh, less than 2 hours of sleep, because then I decided my legs felt surprisingly good enough to wake up at 7:15 a.m. and do the Fort Collins’ Running Club’s Lee Martinez 10-kilometer Tortoise and Hare Race. Despite having low enough expectations that I didn’t even bother to wear a watch, somehow I managed a PR (43:32) by over a minute and was the “male hare,” only getting smoked by a new girl named Michelle who was both super fast and cute.

Speaking of attractive women, later that evening I had company over: my friends Dana and Kimi. Nick (my good friend and husband of Dana) unfortunately could not make it, so it was just me and the gals.

It was a French-themed night as for dinner I made a salad with a European blend of lettuces and a homemade French dressing, French Chicken over long-grain rice, and French bread (okay I didn’t make the bread, that was courtesy of Albertson’s.) Also made an applesauce cake to celebrate Dana’s upcoming birthday! Unfortunately she will be in Michigan for her birthday so now was a good time to celebrate it.

Then we watched A Good Year, a movie filmed in Provence based on the most excellent book of the same name by Peter Mayle, but was panned by the critics. We could see why it was panned, but it was a fun movie nevertheless. Or at least what I saw of it. I fell asleep during 30 minutes of it, missing much of the end.

Short naps, now it seems, was a big part of the weekend. (Even during the bike ride, I had to nap for 10 minutes off the side of the road at Mile 100.) Then again, there was always Monday to sleep in!