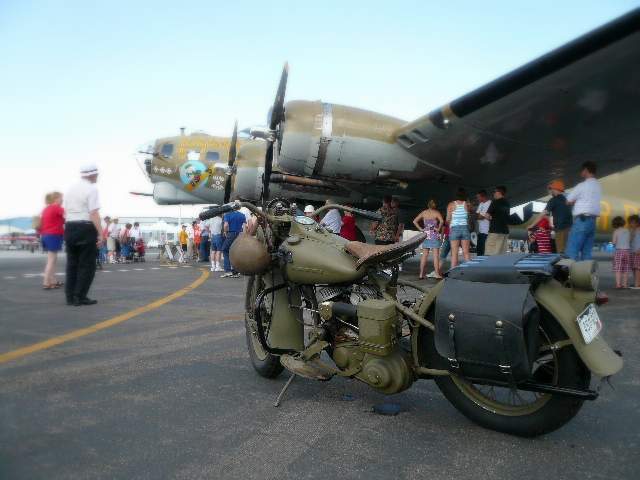 Earlier this week, a few bombers swept down onto Fort Collins as if it was Germany in the 1940s, or worse, Iraq! Fortunately, no Nazis or insurgents had invaded our peaceful town in the Front Range, and this was strictly for a history lesson dubbed “Wings of Freedom” courtesy of the Collings Foundation.

On hand were a B-17 Flying Fortress, B-24 Liberator, and B-25 Mitchell, along with some vintage cars (and a motorcycle) owned (I think) by the Collings Foundation. One could even take flight in one of the bombers for half-an-hour for roughly the price of, say, Britney Spears’ garbage on eBay (~$400), but not having quite as expensive trash as Ms. Ooops-I-did-it-again, I declined and paid $10 for a mere viewing.

This fee was well worth the chance to actually walk through one of these historic machines that destroyed numerous human lives all while helping bring an end to Hitler’s ill-advised World War II. Due to the long lines and arriving rather late in the afternoon, I only had a chance to go inside Boeing’s B-17G, which was educational in itself.

My first observation was that even though it is almost the size a modern-day commercial airliner, inside is more claustrophobic than a bathtub. Wending from the cockpit to the machine gunners’ area, I had to be careful not to bruise my noggin while ducking or squatting through a narrow, exposed (to the ground 10 feet below) corridor, and could not imagine one of the ranks of the morbidly obese attempting the same feat. (Indeed, even the puny airplane that I jumped out of was like a warehouse in comparison!)

Being inside also gave me a better idea of just how much courage one of the WWII veterans must have had. These plans seemed to pre-date any safety standards, and of course those who occupied the bombers had to face being shot at with the only thing protecting them were a couple of sheets of riveted aluminum wrapped around them like a loose cocoon.

Many machine guns pointed out of windows from the B-17. This, in addition for its reputation for being rugged enough to maintain flight even while damaged, is part of the reason for its nickname, “The Flying Fortress.”