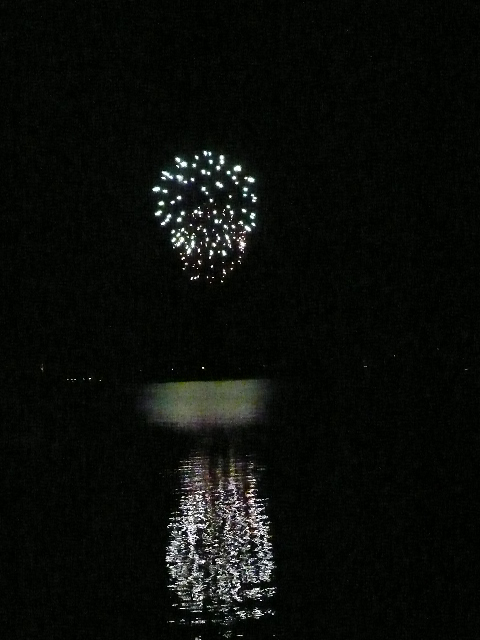 This year I was actually around for our country’s Independence Day, meaning that I got to watch fireworks in Fort Collins for the first time. My neighbor told me the she could watch some fireworks from her rear deck last year. Hence, I was just going to stay home and hope for the same from my rear deck, but at the last minute acquired grass-is-greener syndrome and thought, “but what if the other firework shows going on are better?”

So I hopped on the commuter bike to go into town, only to turn around after my front headlight broke and I got devoured by mosquitoes as I tried to fix it. Ah well, I sort of wanted to take Goldie for a ride anyhow. And so I roared into town in the MGB…

Mistake! The streets were clogged with motorists and especially cyclists and pedestrians within a one mile radius of City Park, where the city of Fort Collins puts on its annual fireworks show. Ultimately, I parked about two miles away and tried to watch from a distance. This was not optimal since there are tall and thick trees all along the streets of Fort Collins, with their trees and branches often obscuring views of the bright exploding lights up in the sky.

My friend Ryan, apparently, had a better idea: watch those fireworks from the top of the courthouse. Those who wish to watch the City Park fireworks may be well-advised to try that. Whatever you do, don’t make the mistake I made by trying to drive to City Park; either bike, walk, or take the free Transport shuttles from the Downtown Transit Center instead that night!

I ended up driving home along Country Club Dr. to witness the fireworks put on by the Country Club. Let me tell you, these were better than the City Park ones. First, there were much less people there and there was plenty of space for viewing. Second, the displays reflecting upon Long Pond were spectacular! Go here instead of City Park if you can.

After hanging around for ten minutes, I continued my journey home and watched the same displays from my back yard. The view wasn’t quite as good as over Long Pond, but had the bonus of being able to watch them while sipping lemonade on the rear deck.