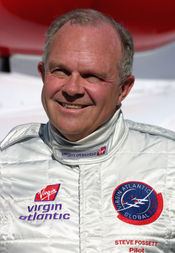 And that is what I love most about Steve Fossett: he proved the choice doesn’t have to be either/or. One can pursue a whole range of activities and excel at all of them.

You may already have heard about Steve Fossett’s round-the-world-in-a-balloon attempts, which he finally succeeded at in June 2002. But, did you know the following about him?

His list of specific achievements is so long that I won’t even try to summarize all of them on this page. Besides, a complete list of his records and awards is here.

Before you dismiss him as being a megalomaniac, his pursuits have pushed out the limits of technology and contributed to the sciences. Most of all, he inspired scores of people he never met—myself included—with his diversified exploits.

Unfortunately, on September 3, 2007, Steve Fossett disappeared á la Amelia Earhart. He was last seen taking off in a single-engine Bellanca from the Nevada airstrip owned by hotel magnate Barron Hilton. Two weeks later, the Civil Air Patrol called off its search-and-rescue efforts when advanced technology—including the use of Google’s high-resolution satellite imagery—failed to turn up anything. We can only now assume that Steve Fossett is dead.

But I actually don’t feel too sad about this since he had already lived to the fullest extent imaginable, achieving what most people would not even attempt if they had 100 lives. He redefined what it meant to be a modern-day Renaissance Man, and I hope he passed away content knowing that.

Although Fossett deserves immense credit for being courageous, he doesn't deserve kudos for running dogs in the Iditarod. The truth is that he abused dogs. The Iditarod has a history of dog deaths, illnesses and injuries. In addition, The Chicago Tribune reported that "During the 1992 Iditarod, a 1,165-mile Alaska dogsled race, Fossett's lead pooch decided to take a break. No amount of yelling got the dog moving, so Fossett got down on his hands and knees and bit the husky on the ear. The bite, Fossett wrote in his memoir, 'Chasing the Wind,' "was hard enough for him to know that I was the lead 'dog,' that I was the alpha male in this chain of command." (http://chicago.metromix.com/tv/article/global-adventurer-fossett-pursues/182522/content )

To learn about the cruelties of the Iditarod, go to http://www.helpsleddogs.org . ↩ Reply

You got me with the first line of your post. I never knew there was a third part of the Jack of all trades phrase! This made my day. ↩ Reply