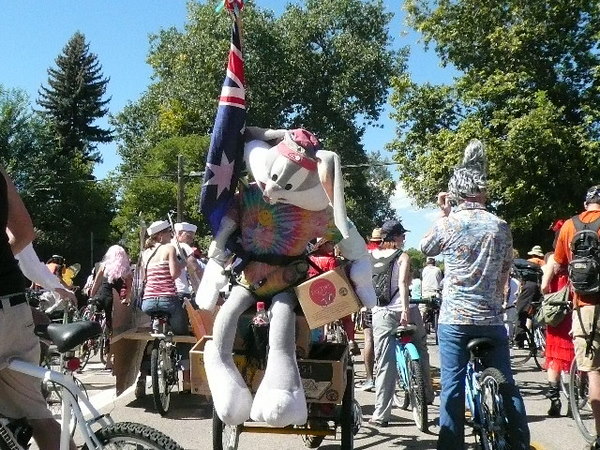 Try as I might, I just could not catch up to him. Who? Bugs Bunny.

It’s not that Bugs was fast—in fact, he was rolling along so slowly on the back of a bike that even a girl pedaling a tricycle was able to keep up with a grin on her face. But Vikings, gladiators, and the Teletubbies (among others) blocked my approach and prevented me from talking with one of my favorite cartoon characters.

Yes, it’s that time of year again, when navigating the streets of downtown Fort Collins felt eerily like being in the two-wheeled chaos that defines traffic in Saigon. Well, almost. The people here were dressed more colorfully, everyone was cheering and happy, and there were plenty of opportunities to ask, “What’s that?”

I busted out the red recumbent for this event, met up with some friends at the start of the tour (New Belgium), and then took over the streets along with 4,000 other folks. Despite rolling along usually at no more than three or four miles an hour, we all had silly grins on our faces. Judging by endless whoops and cheers we heard, the spectators lining the streets and even the motorists who patiently waiting for eons at intersections also enjoyed the parade.

I’m already starting to think of things I could dress up as next year, since this year, I was lame and just dressed up as a cyclist.

According to an article in the “Coloradoan,” this year’s event may have eclipsed the former record (set in Taipei last summer) for the world’s largest bike parade. Hence, this was the second world record attempt in two years I took part in (albeit in the smallest of ways). Our last world record attempt—at The Ranch in Loveland—failed in March 2006, so I hope this time we were successful. We should know soon!