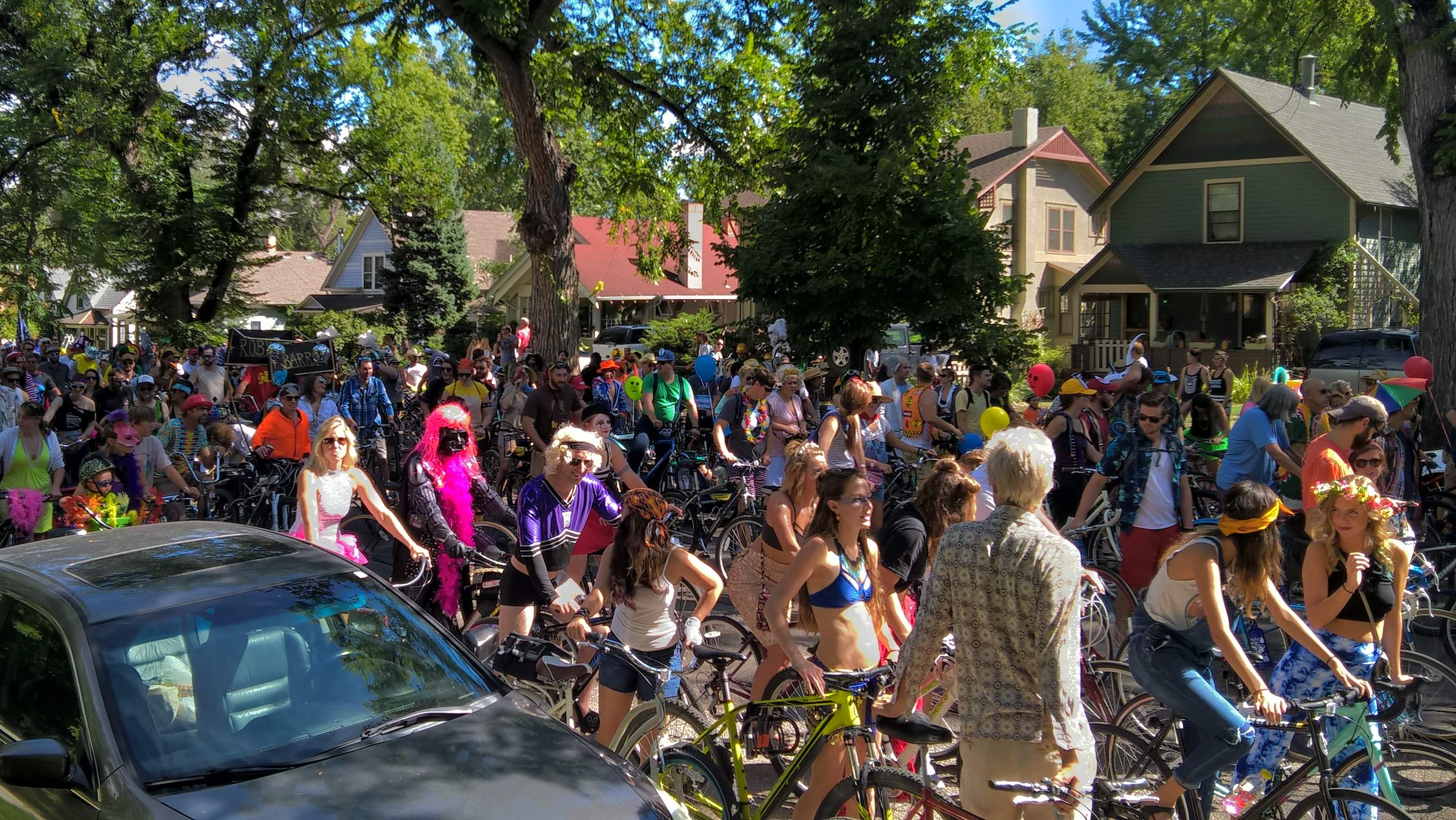 I was spending Friday afternoon in perhaps not one of the most typical ways: dressing up a Porsche red Reynolds Wishbone recumbent with $0.69 worth of posterboard, tape, and aluminum foil. You might be wondering why. The answer, of course, is because of the annual tradition in Fort Collins that is the Tour de Fat, one of the largest (if not the largest) bicycle parades in the world where bicycles come in all colors and shapes and sizes, including completely different forms not looking anything remotely like a bicycle.

Mine, in fact, looked more like the Batmobile. Or so was my mind’s imagination, which admittedly can vary widely from others’. Those crumpled, taped-on pieces on the rear of the seat, for example, were actually exhaust pipes.

Anyhow, the Batmobile—or rather, the Batcycle—was a go! Unfortunately, I had expended all my available energy for Friday decorating the bicycle that I didn’t have a chance to work on a costume for myself. You can say I went as a civilian Batman imposter with no Batsuit.

I did manage to rig up a rather ghetto video-taking camera setup to film festivities in a point-of-view manner, however. Judging from the copious amount of globular duct tape I used for it, the folks at GoPro probably won’t be having many sleepless nights over my competing “solution.”

One female Tour de Fatter noticed my videography apparatus including the rather low height of the camera mounted on the ground-hugging, wind-cheating recumbent frame. “I bet you are getting a lot of *ss shots,” she said.

Looking at the video I captured, it looks like she was not wrong.

Note to self: in the future, try using some sort of extension like a selfie stick.

No matter; it was a fun “ride” regardless. I put that term in quotations because with the tens of thousands of people on route, the “tour” part of the event turned out to be an absolute farce. But the “Walk-a-bike de Fat” does not have as good of a ring to it.

My hamstrings were getting sore after an hour of this. Try “walking” your rolling office chair forward while sitting on it and you can get a sense of what I mean. Also, I was getting a few too many errant whiffs of weed from the folks I was surrounded by. So eventually, I pulled out of the parade and off the road underneath a neighborhood tree.

This turned out to be a good call for a number of reasons. In addition to giving my hammies a break, I could better appreciate the diversity of animal/superhero/abominable machinations that were rolling down the street. I could take a few slugs of my water bottle, although later on in the morning a resident offered me a can of grapefruit IPA because obviously beer is a better way to rehydrate for this sort of event. She also gave me a donut.

Finally, it was easier to meet up with some friends. “Felix!” exclaimed my friend Allie from salsa dancing.

She, unlike I, was actually not too lazy to dress up in constume. She even dyed her hair red. Accompanying her were Amy and Brian on a tandem bicycle. Amy was dressed up as a horse and Brian as a tooth. Horse-tooth. Horsetooth. Get it? You would if you lived in Fort Collins with the iconic Horsetooth Rock looming overhead.

We then proceeded (pedaling instead of walking by this time, hallelujah) down Mountain Ave. as Allie was hoping to get down to the Rio Grande restaurant where her friend Roger was going to do some sort of salsa dance number. Unfortunately, this is when Amy had a wardrobe malfunction, although not the Janet Jackson type. Instead, her hairy horse tail got caught in the cassette of the tandem. Brian and I struggled to remove the clump of hair from the cogs, but Amy emerged a few moments later with scissors, which she had acquired by knocking on someone’s door. Problem solved.

Then Allie and I rode down to the Rio where we missed Roger’s performance, but where Raquel was waiting for us. Moments later, our friend Chris came by. We then munched on Mexican food and sipped margaritas.

After our stomachs were satisfied, I got a message from Olivia—who apparently had already gotten a wee bit drunk by 9:30 a.m. at a party around the corner. Despite her not-100%-sober state, I managed to convince her to stop by, which she did being dressed as a bumblebee.

Meanwhile, other participants of the Tour de Fat pranced on by wearing tutus, Afros, elaborate costumes, and sometimes no costume. As in wearing only a few ounces of fabric.

“This is better than Halloween,” Olivia remarked, probably not referring to all the buff bodies and bare skin around.

We concluded the afternoon by walking to Mugs Coffeehouse to hang out and enjoy the afternoon. I left the Batcycle—er, recumbent—unattended against a wall near the Rio, sans lock because I didn’t even think to bring one.

“Is it going to be all right there?” one of my friends asked.

“If someone could actually ride off with it,” I quipped, “he or she should get some sort of award.”

As to prove the point, I challenged Chris to try to ride it. As you could see in the video alluded to above, he was not quite successful at doing so.

“I’m amazed you were able to ride that without crashing on anybody,” he later said.

Indeed. I am sure there are not too many people who could figure out how to operate the real Batmobile either.