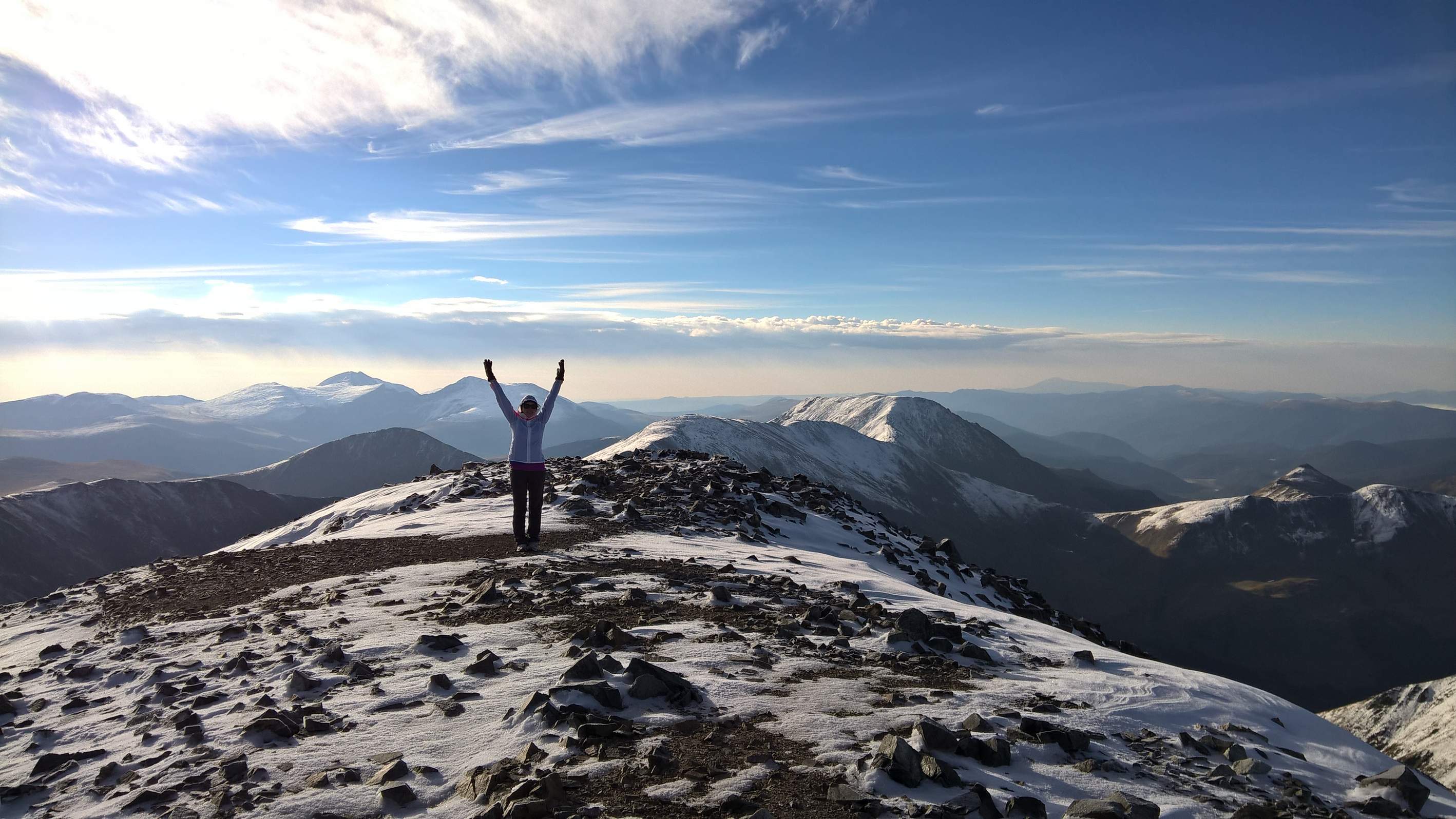 The summer was almost already over, and it was time for a fourteener. Or two.

The May backpacking trip in the Black Hills of South Dakota, after all, rekindled my love of hiking and mountaineering. With 54 summits in Colorado over 14,000 feet, there are ample opportunities to saunter up to a peak well above the tree line and nearly into the clouds.

We ultimately decided to climb Grays Peak and Torreys Peak, which are within a two-and-a-half hour drive from Fort Collins, are situated within a half-mile of each other, and would allow us to bag two summits in one outing. To minimize the chances of getting turned around by a midday storm, we woke up at an otherwise ungodly hour of the morning, drove over to Exit 221 on I-70, and parked the PT Cruiser just south of the highway in a parking lot known as the summer trailhead for Grays Peak.

We then started hoofing up the three-mile-long road to the winter trailhead of Grays Peak—trip reports had warned that it would be best not to attempt to drive up this road in anything but a high-clearance, four-wheel-drive vehicle—when almost immediately, a pair of kind, elderly women named Ella and Cindy in a Honda CR-V dubbed “Dory” pulled up alongside and offered us a ride. We gratefully accepted and reached the winter trailhead at 4:40 a.m. to commence the hike. Thanks, Ella and Cindy!

We did the first couple miles with the trail lighted by nothing but our LED headlamps and a star-studded sky. We were making good time. There was no sign of anyone else out here until an hour in, when I pointed up towards Grays Peak and said, “Look! There’s a whole group of people up there,” alluding to about a dozen white and red lights that could be seen in the distance.

By the time sun started to reveal itself over the horizon, we were already halfway up. It is about here we encountered well-packed snow. It was cold enough that I stopped to put on a rainjacket and Maureen got out her windbreaker.

No long afterward was a fork in a trail—the left fork heading towards Grays and the right fork towards the saddle between the two peaks and ultimately going to Torreys. We went the more typical way, towards Grays.

The trail then switchbacked up the mountain, keeping at its promised Class 1 (as in not too steep or difficult) rating. Closer towards the top the snow got a little deeper with visible postholing. We hung around long enough to snap some photos before heading towards the saddle and Torreys.

The trip reports I read warned that the descent towards the saddle was the most difficult part of the trek. I soon found out why: it was steeper, with plenty of slick snow, and fairly exposed to drop-offs on the left and right. At first I offered ski poles to Maureen, but it turned out she was actually more comfortable hiking down this than I was so she gave them back to me. My trail running shoes had insufficient traction and suddenly I was longing for some Yaktrax.

We managed to get down to the saddle slowly but safely. By this time, the sun was high in the sky and the air was warming up.

Here we encountered too friendly guys: one from Kentucky and another one from Texas. The latter was wearing shorts. He was also wearing a mere t-shirt until he got to the top of Grays where he put on a windbreaker. “Tough guy,” I said, still slightly cold.

When we talked with him the Texan had just summited and descended Torreys moments earlier. “Piece of cake,” he said of the Class 2 climbing. “There’s some scree but there’s enough snow to hold it together.”

In fact, this ascent seemed much easier than the descent off Grays because of there being less snow and more rock. It did not take us long to reach the summit of Torreys where we took some photos. Maureen also did a couple yoga poses and did a headstand up here.

We then descended down the mountain. We took our time. Midway down, we stopped to have lunch.

We got back down to the winter trailhead just after noon. We then hiked over a mile down the three-mile road towards the summer trailhead when a nice couple from Illinois—Ken and Sandy—offered us a ride in their SUV. We accepted and were back to the car in no time. The generosity of hikers is wonderful and I hope to be able to return the favor to others one day.

The timing of getting picked up turned out to be perfect too as it had just started to shower. We beat the storm. We then drove to Idaho Springs for some well-deserved pizza.

There are maps, directions, and hundreds of other people’s trip reports at the excellent 14ers.com website.