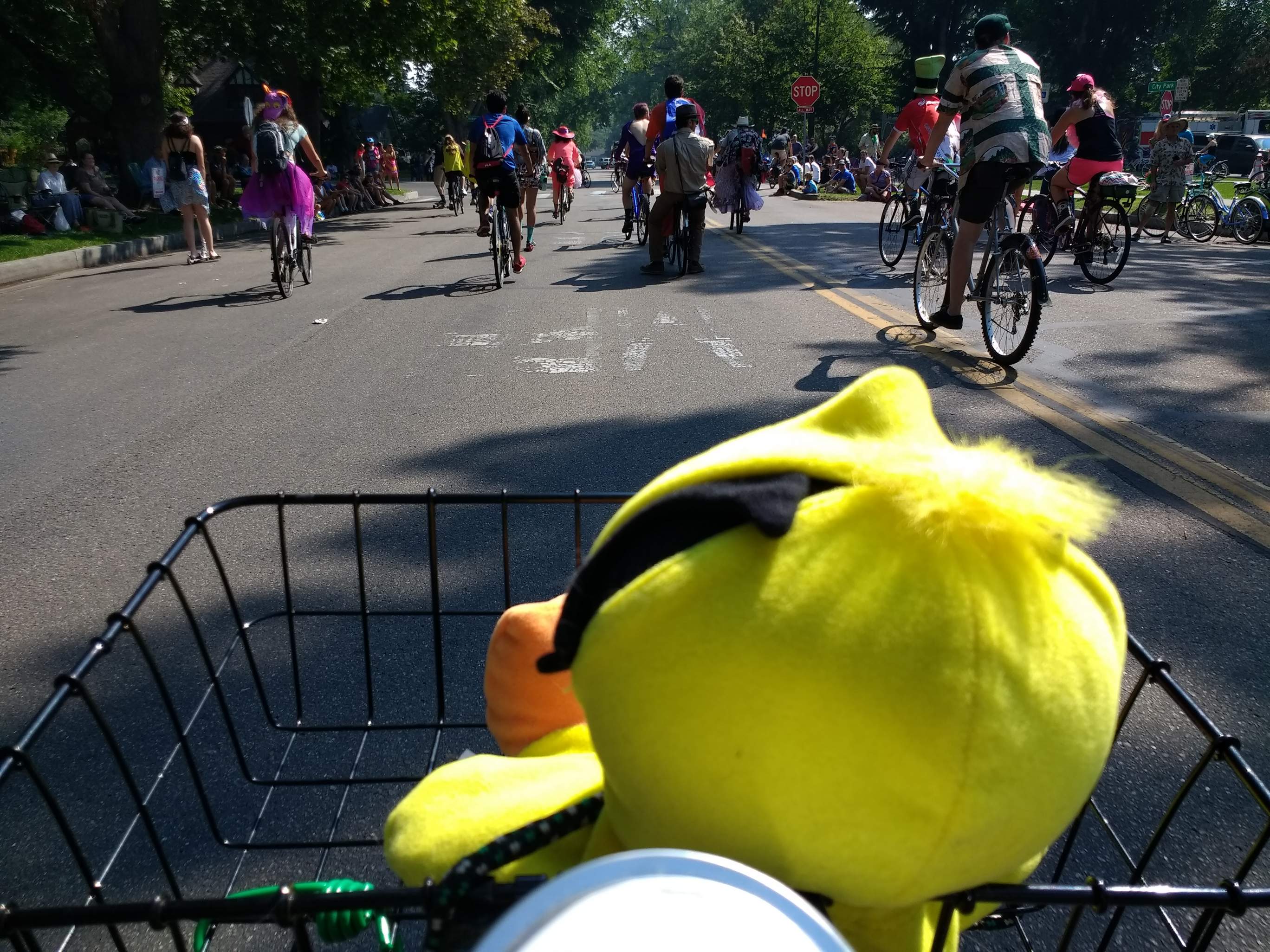 Today was the Saturday before Labor Day, which is a particularly important day for Fort Collins because of its biggest “holiday” of the year. Yep, I mean the Tour de Fat.

For some reason, some of my closest friends did not have quite the enthusiasm I did for what is admittedly not the holiest of holidays. Some saints might actually consider it infantile. After all, the founder and initiator of this party on wheels is New Belgium Brewing Company, which if you could not tell by its name, brews beer. Its motto also is Find Your Folly.

But at least my buddy Wes—who recently motorcycled from Chile to Fort Collins during the first seven months of the year on a Kawasaki dual sport—came over to partake in the fun. He came dressed as a biker (e.g., Harley) dude as he was hoping to join some self-proclaimed, pseudo “biker chicks.”

I also brought along the following mascot:

If you can’t tell, that is Felix the Cat wearing a duck outfit, as even mascots want to dress up as something else during Tour de Fat, apparently.

From my house, we pedaled over to my friend Jaclyn’s house, as she was having something of a pre-party. From there, we went to yet another party only 0.7 miles away—and also a single block away from the Tour de Fat parade.

We—or at least Wes and I—then rode in the parade no less than two times, before encountering some of Wes’ friends en route, including one dressed as a towel. (Specifically, Towelie from South Park.) Then, we met up with our “biker chick” friends… never mind only two of them ended up dressing up somewhat reminiscent of a Harley gal, fake tattoos and all.

We were then considering stopping by New Belgium for a post-parade party, but then learned of—and was dissuaded by—the $25 entry fee. I think the entry charge was something new this year. Maybe crowds in the past were getting too out of control.

Whatever the case, the event was still fun, even if I overheard someone saying that doing the event every year starts to become a little monotonous. Maybe next year I will try being more of a spectator instead of a participant. I might even be able to get more of my unenthusiastic friends to join, then.

Here are some very brief video clips I took of the parade.