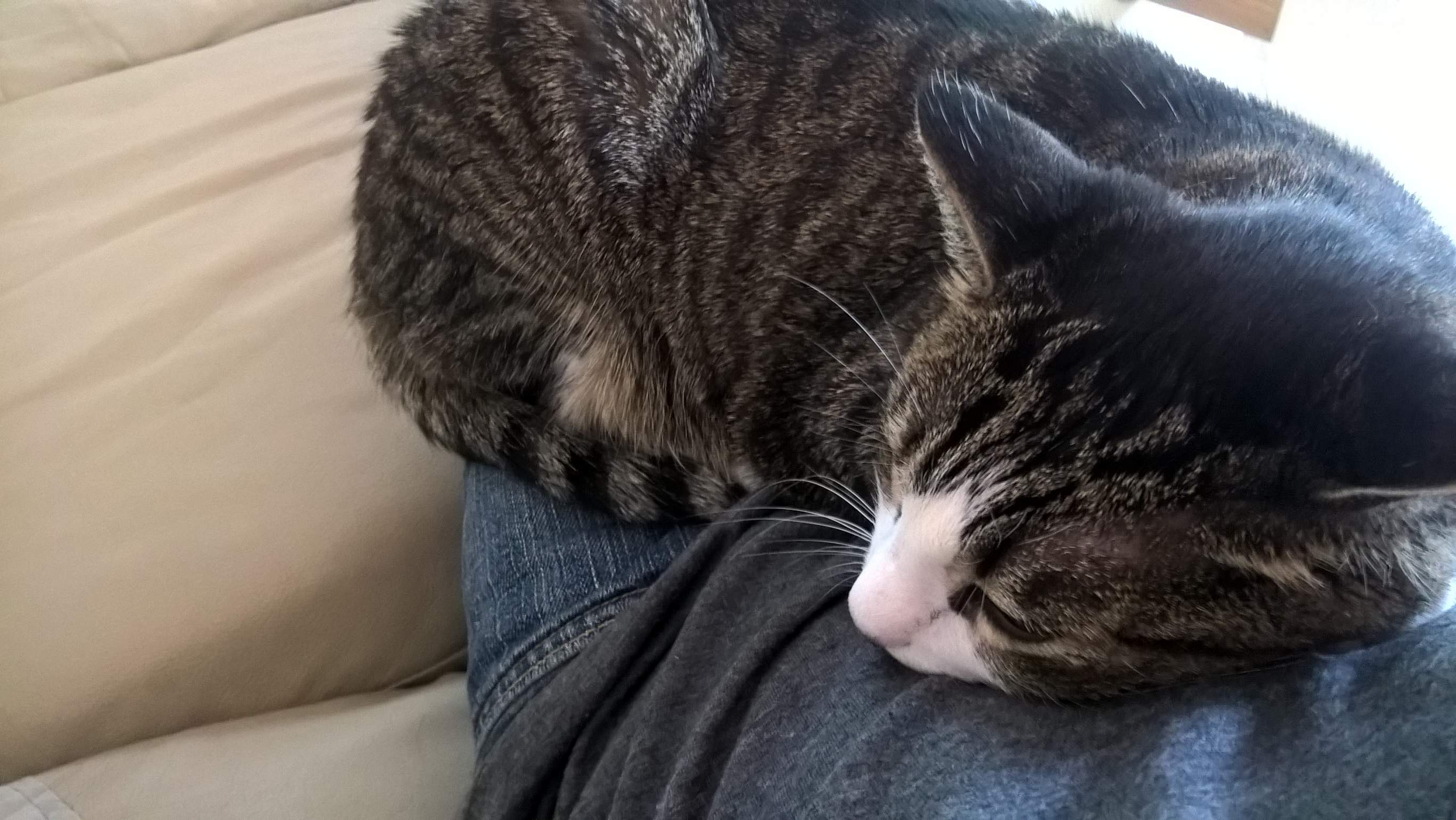 I haven’t devoted much virtual ink on my website about my two furry family members. I first took them into my home in January 2010 to help out a friend who was going through some major life changes, and eventually adopted them. Ever since stepping their paws into the house, they have brought lots of laughs, love, and joy. Oreo and Tiger were from the same litter and have never been apart for more than a few hours.

So it breaks my heart that Oreo will finally have to live without his sister, as Tiger passed away on September 3, 2017, at exactly 9:00 a.m. She was only a few months more than nine years old, which equates to 50-something human years. While her passing was not entirely unexpected, deaths are never easy. Especially of a loved one.

Tiger had been healthy for at least the first seven years of her life, always breezing through her annual examinations at the friendly veterinarian’s office like a child prodigy acing an algebra test. Until recently, she was almost always at an optimal weight, had good teeth, ate well and was about as active as you might expect an indoor cat would be.

I remember when she first moved into my home and I would marvel at how she would effortlessly leap onto a five-foot-high shelf in the basement, then through a one-foot-square opening to land on a venting duct eight feet high off the floor. In rock climbing terms, that is like dyno-ing up to an overhung hold and successfully grasping onto it, but without a rope. Miss and you are falling a long ways down. Yet, she never did.

Even as recently as nine months ago she was jumping onto and tight-roping the second story’s banister rails. Four months ago, she was still engaging in wrestling matches with Oreo. But earlier this summer, I started to notice her weight declining. Even making sure that Oreo could not steal her food, and giving Tiger free access to dry food in addition to her normal wet food, was not halting the weight loss. By the time I brought her in for the cats’ annual physical, I was very concerned.

The vet carried out a blood test and at first we were kind of expecting the samples to indicate that Tiger had a kidney problem—something not uncommon for mature cats. But the blood tests came back normal except for anemia (low iron levels). So now we were looking for an even more serious issue, like cancer.

I then brought her in to a clinic for an ultrasound, which revealed lumps on Tiger’s lymph nodes, liver, and spleen. Not good. There was also fluid buildup in (or maybe around) her stomach. Some aspirates that were sent out to CSU, along with a (later) consultation with an oncologist, confirmed our worst fears: that Tiger had an aggressive form of carcinoma. Both the oncologist and my vet glumly predicted that Tiger had only a couple months to live—maybe a couple more if we did many rounds of chemotherapy treatments. I sadly knew they were probably correct considering how Tiger was seemingly losing weight by the hour. At the rate the cancerous cells were gobbling up calories, she would soon have nothing left.

Her energy and strength, predictably, also had weakened significantly. For example, two weeks ago, she was still able to jump on my bed to snuggle with me at night. But then ten days ago, she tried and seemingly missed the bed by a mile. She tried a second time, again failing to reach the covers. It was actually quite cute as I was rolled over, half asleep, only to see Tiger’s head momentarily pop up above the plane of the bed. Alarming, but definitely cute. I stepped out from under the covers to pick her up and carry her into bed so she could snuggle with me.

Anyhow, given the prognosis, I decided upon focusing on palliative care only (no chemo), which involved giving Tiger half a pill of Prednisolone. This corticosteroid was supposed to help reduce inflammation, reduce pain, increase appetite, and have weak chemotherapy-like effects on the tumors. At first, Tiger seemed to be responding well to the medicine, eating more the first few days she was on it. But her health nosedived by the fourth or fifth day on Prednisolone, notably having little bladder control. And by Saturday night, she seemed to be breathing harder and making noises that sounded more anguished than her normal meows.

By Sunday morning, she could hardly eat a single Temptations treat. It took about five or ten minutes to get her to chow down a couple more treats along with her medicine wrapped with a Pill Pocket. It’s not as obvious as to when a cat is suffering as when, say, a human is, but by this time, I could already tell that if her condition did not improve over the next few days, I was going to have to consider bringing her in to be put to sleep and put out her misery. Deciding when someone else dies is not something I ever wanted to have to do, but that was the situation.

Less than an hour-and-a-half after, Tiger spared me from having to make the decision.

A couple minutes before 9 a.m., I heard Tiger yelping, so I went downstairs to pet and console her. “I’m sorry, Tiger,” I said as I lovingly stroked her. I then went into the garage for a couple minutes and heard her give a final yelp. I came back inside 30 seconds or a minute later and she was now lying on the floor on her side, legs splayed apart, motionless with her eyes and mouth open.

“Tiger?” I said out loud, fearing the worst. “Tiger?” I said again five seconds later. My good friend Erika, who has been renting a room in my house for a couple months before moving soon to Vermont, had just come down the stairs and was standing a couple feet away from me. I glanced at her quickly but she couldn’t say anything, as she too had realized that Tiger had passed away.

It was surreal. “She was yelping just two minutes ago,” I finally muttered, after kissing and stroking poor Tiger a few times.

I phoned Maureen (back in St. Louis), who loves Oreo and Tiger almost as much as I. We talked for a bit as I shed some tears next to Tiger’s body. Tiger was a good cat with a good life, we agreed. The timing of her death—about five days before I would leave the country for extended travel—actually could not have been much better, as it allowed me to say my goodbyes to her in person, wrap up loose ends, and not be consumed with worry about her while trying to enjoy a trip abroad.

My attention then turned to Oreo. Maureen rightfully suggested that it was important that he understood that Tiger had passed away. I believe he did, as when I was tending to now-motionless Tiger, he walked around me, kept his distance, and went upstairs to sit still and silently at the top of the staircase. Finally, when prodded, he gingerly came halfway down the stairs to gaze at Tiger lying there on the floor, still keeping his distance. I think he recognized a dead cat when he saw one.

It wasn’t until we placed Tiger onto a towel in a cardboard box and covered Tiger’s head that Oreo came over to visit and sniff her. I felt so bad for Oreo, losing his sister and best feline friend.

An hour later, when I was ready, Erika brought me and Tiger to the emergency vet clinic for what they called “aftercare,” in which I decided what to do with the remains. Tiger will be donated to Colorado State University for research before being cremated and spread. The vet clinic will be making paw prints for me too, which I will see upon my return from overseas.

While it is very sad, I am glad that Tiger is no longer in pain and that I was with her to give her affection just moments before she passed. She was a sweet cat through it all and I think she had a good, happy life for the most part. I also feel lucky to be able to say goodbye before leaving Fort Collins soon, and that my house/cat-sitter won’t have to deal with taking care of a dying cat.

Most of all, I am grateful for the happiness and warmth Tiger has brought to the home all these years, and how she (and Oreo) has turned me into something of an animal lover. I will cherish her memory forever.