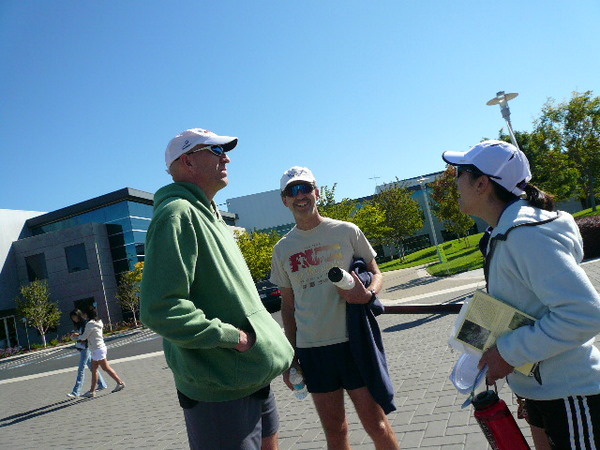 “I just put my check and registration form in the mail,” I wrote my friend Alyssa. “My first race in over two months now.”

Yes, after a period earlier in the year where it seemed like I was either cycling in a long-distance brevet or running a race every other week, I somehow managed to suppress the urge to send in another race application form until now. But that is not to say I had become a couch-squatting TV surfer. In fact, during that time I put in some serious running miles (for me) in preparation for three consecutive weekends of races. The Trailblazer 10k in Mountain View, CA was Race #1.

Happily, not only was Alyssa doing this race, but so were a couple of old friends: Russ and Steve. The two of them—from the Tri-City Triathlon Club—do only two or three competitive runs a year, so this was as coincidental as finding out that your in-laws were planning on vacationing in the same town and days as you were. I was especially pleased that they’d be at the race since I had last seen Steve in Boston two years ago, when I went to cheer him, Russ, and Sharon on at the Boston Marathon.

At the race start location of Microsoft, I saw Alyssa first. Or, she actually found me in the registration line bouncing up and down, trying to stay warm. After throwing our free race T-shirts into our respective vehicles, we did a one-mile warm-up run together. Alyssa was in good spirits, which may have been due to the weather getting sunnier and less cold by the minute. It may have also been because my Mac-loving friend was able to get away from Bill Gates’ Land of the Geeks and the Evil Empire.

We then returned to the starting location and I quickly found Russ and Steve, who by their accounts had said, “Funny, we haven’t seen Felix yet” just ten seconds earlier. A few minutes later, the race countdown commenced followed by participants’ legs turning over like the Road Runner’s.

My race strategy was to keep my breathing and body relaxed for 1.5 miles and then pick up the pace by about ten seconds per mile. I was delighted that despite my conservative start, my stopwatch displayed 6:25 after the first mile. Around this time, half a dozen runners in front of me peeled off from the front group like a squadron of fighter jets hit in combat, unable to keep pace.

In contrast, I was not only keeping tempo but speeding up a little bit. I mentally counted “one-two-three-four-five-six” every 1.8-1.9 seconds to help me achieve this, the goal being to land on my feet more than three times per second for a cadence of about 185-190 steps per minute.

As promised by Steve, the course was near-ideal for running fast with only a couple of trivial uphill spans. One thing that was not conducive to maintaining tempo, however, was the number of turns in the route—including two U-turns. I tend to have “tunnel vision” when I run, and twice I nearly ran straight through some cones instead of turning, only to be redirected by volunteers who said, “no, no, turn left!” at the last second.

Another thing that may have slowed myself (and other 10k runners) down was the virtual ribbon of 5k participants that I threaded my way through along the Stevens Creek Trail during the last 1.5 miles. In this home stretch, I spotted a boy who could not have been more than seven or eight years old who was actually passing some adults. It took me a while to catch up to and pass him, and when I finally did, I said to another man, “That is one fast kid!”

In the last 100 meters, I sprinted like a wild man, motivated by the realization that I could finish under 40 minutes. My final time was 39:40. This was almost four minutes quicker than my former personal best for this distance.

This was fast enough to finish seventh overall (out of 239 people) and third in the 30-39 age group. Every racer who finished before me was male and older than me by 5-19 years. This included a tall, muscular 51-year-old whom I was chasing for the last four miles but could never catch up to. This gave me much hope that I can continue to get faster in the next two decades.

After the race, a television reporter interviewed me. She asked me questions ranging from how did I place, what foods did I eat and how much sleep did I get to prepare for this race, to what did I focus on during the run to get me through. Fortunately, by this time I had caught my breath and blood was once again flowing to my brain, and I managed to sound at least half-articulate instead of like a drunken bum who had just been chased by the police. Or so I imagine—I never did see the telecast on Channel 16.

Then I met up with Steve, Russ, and Alyssa, who were rightfully pleased with their performances. We munched on fruit and Odwalla bars, and at the awards ceremony, Alyssa and I won books, thanks to Alyssa’s lucky raffle number and my third-place age group finish.

The four of us then drove to the Palo Alto Farmers Market, where Alyssa and I munched on delicious crepes and Russ and Steve forked up some tasty-looking Mexican food. We reminisced about endurance events such as The Relay and laughed about old times when “Felix really didn’t know how to swim,” which was only about six years ago. We agreed that the next time I was in town, we’d have to do another race like this together. It was, after all, a very fun and healthy way to spend a weekend morning, and I can only hope that my upcoming Race #2 and #3 go as well in the next couple of weeks.

"Tri for Real" and it never recovered. Once again congrats on a great time! ↩ Reply