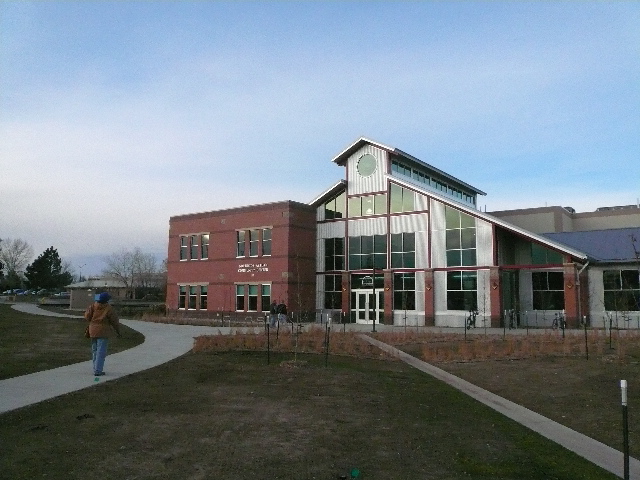 Two Saturdays ago I went to new Northside Aztlan Community Center in Fort Collins. There were a couple of reasons to do so: 1) to celebrate the grand opening of the city’s newest facility, and 2) enjoy some free classes and free food!

The Community Center had long existed as a 15,000 square feet facility. This year, that building was torn down and a 50,000 square feet one was built in its place. Since Fort Collins is a green city, this center was built with LEED silver-level certification in mind. Nine tons of material were diverted from the construction site (a former landfill) to recycling centers, and conservation of water and energy was addressed, as epitomized by the dual-flush toilets.

Activities offered at the center for adults include salsaerobics, karate, yoga, spinning, clogging, strength and tone, karate, contra dance, and aikido. There were free demos for all of these. I participated in a spinning class, and then a yoga one. (It wasn’t very good; I miss my former yoga instructor Heidi from Fremont, CA!) I also attended the martial arts demonstration, but they captured my interest no more than when I was a kid.

I also worked out with free weights and machines (instead of working out in my basement that day). There were many stations; almost as many as the 24-Hour Fitness I’d go to in Fremont.

Of course, lots of activities are offered for children and teenagers too. The gym was huge with numerous basketball courts. There was a room with three or four pool tables. A skate park and handball courts are scheduled to be opened in fall 2008.

Considering how close the facility is to me and reasonably priced it is ($4/adult per day, with less expensive punch-card options), I should try to go there more often. One of the City of Fort Collins’ official mottos is, “Recreation—it’s for life!,” and I agree.