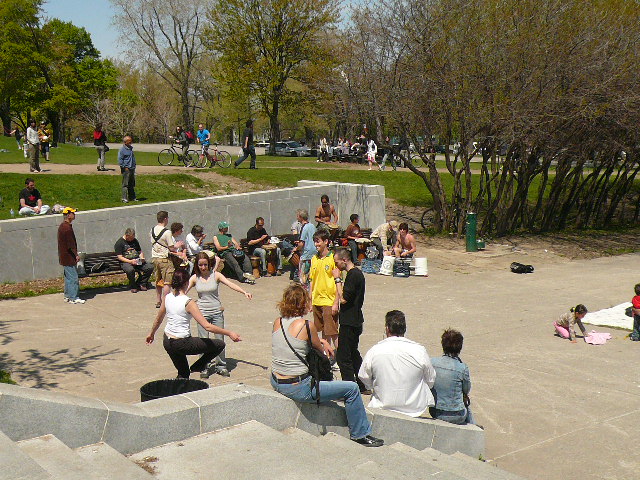 “No, not ‘tom-toms,'” corrected my French teacher, who thought at first that (in my typical mangled French) I was referring to GPS devices. “Tam-tams!”

I first heard about the tam-tams from my friend Kathleen, who used to live in Montréal. I wasn’t exactly sure where one could find them in Parc Mont-Royal, but it wasn’t hard—one could hear them a kilometer away with dozens of people (both residents and visitors) banging on leather and wood drums and even the bottoms of overturned five-gallon plastic paint cans. Meanwhile, others played hackey sack or flapped their arms wildly in the air while hopping around on the ground like a spring in an improvised dance. I merely watched, thank you.

The tam-tams were not the only thing to enjoy at le Parc Mont-Royal. After hiking a couple miles to the terrace at le Chalet du Mont-Royal, one had an unencumbered view of the eastern half of Montreal—a virtual jungle of concrete and glass edifices with already bloomed trees interspersed between them. Just beyond is the St. Laurent River. One is reminded from up here that Montréal is actually a land-locked island.

After more hiking through the woods and enjoying more views from above (“ah, so there’s where the Olympic Stadium is!”), I went back to Le Plateau area east of Parc Mont-Royal in search of (1) Rue Bernard, in which (according to my Fodor’s guidebook) there is “simply no better street for people-watching” and (2) hippies.

I did find Rue Bernard, but it didn’t seem any more “chic and fashionable” or replete with “the bright and the beautiful” (again, words of Fodor’s) than any other street in Montréal. On the other hand, I did see a grand total of two hippies. Still, it’s a great area for dining and window-shopping.