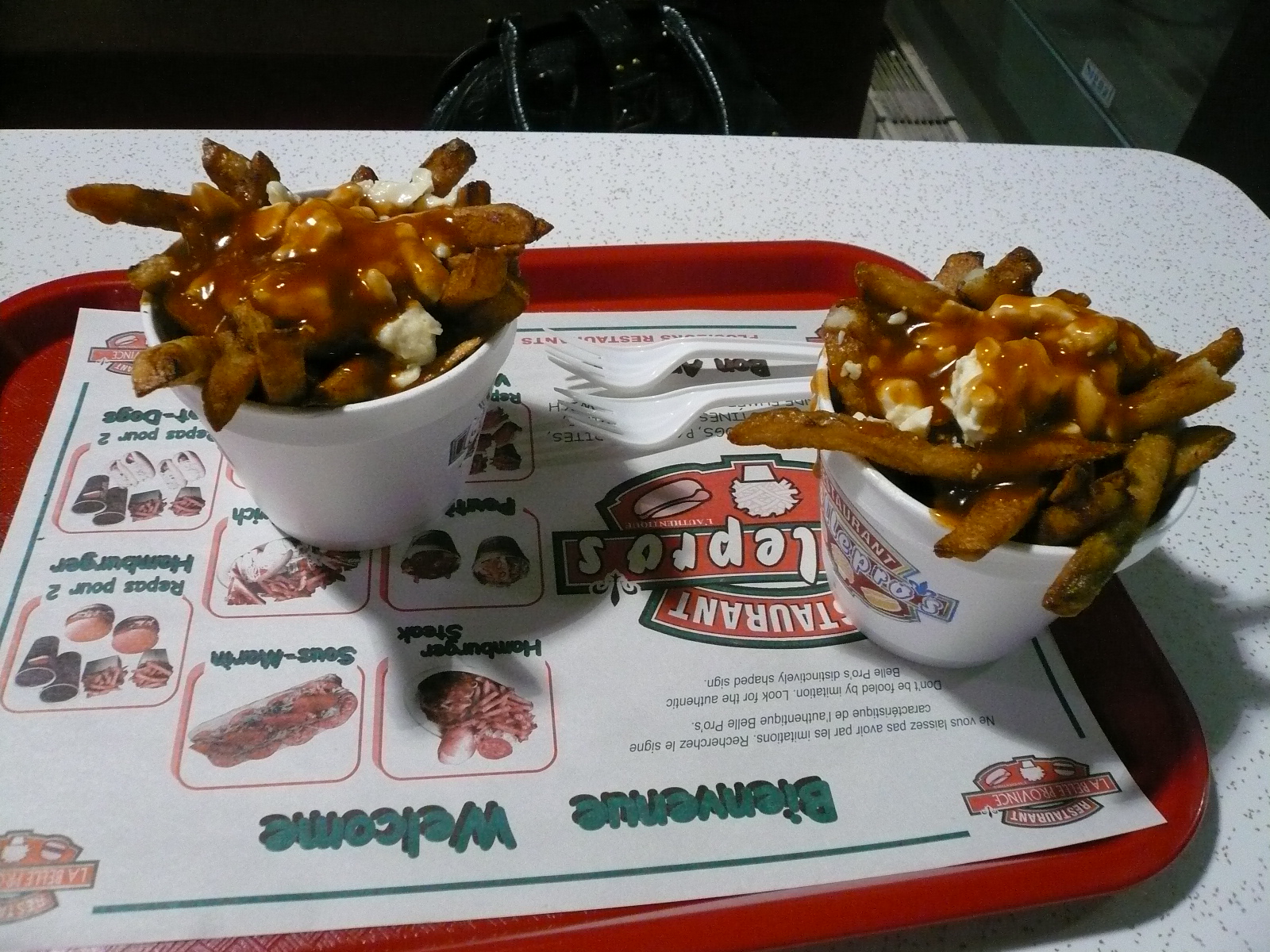 I had not been in Montréal for even twelve hours when I started hearing about it. What? Poutine.

“Don’t forget to try poutine!” wrote a friend who used to live here.

“Last night I ate pizza and poutine,” said an American from San Francisco in my French language school.

So the second night here I went out for a 10:00 p.m. snack of this mysterious poutine. I didn’t even have to resort to Mickey Dees. Instead, I went to an A&W-like joint called Le Belle Province and had a regular-sized cup of poutine. Just one of them, thank you. The above photo has two because one of the Indian subletters I went out with also had a serving of poutine, so no, I did not gorge and pretend I was in some food eating contest by having what might have constituted a McDonald’s super-sized poutine.

That’s probably a good thing, and not just because I already ate dinner a few hours earlier.

Let me explain. Poutine—pronounced “poo-ten” or “poo-tsin” according to Wikipedia (presumably because “ti” is pronounced like “s” in French, although I have yet to hear a single Francophone pronounce “poutine” like that)—is a Québécois “specialty” that consists primarily of French fries. But because the Québec people apparently did not think that think that the 20 or so grams of fat in a single serving of fries was enough, they added brown barbecue chicken gravy and cheese curds.

How did this arteriosclerotic disaster come about? Wikipedia explains,

The dish originated in rural Québec, Canada in the late 1950s and is now popular in parts of the country. Several Québécois communities claim to be the birthplace of poutine, including Drummondville (by Jean-Paul Roy), Saint-Jean-sur-Richelieu, and Victoriaville. The most popular tale is the one of Fernand Lachance, from Warwick, Québec, which claims that poutine was invented in 1957, when a customer ordered fries while waiting for his cheese curds from the Kingsey cheese factory in Kingsey Falls (now in Warwick and bought by Saputo). Lachance is said to have exclaimed ça va faire une maudite poutine (“it will make a damn mess“), hence the name. The sauce was allegedly added later, to keep the fries warm longer. Linguists have found no occurrence of the word poutine with this meaning earlier than 1978.

Anyhow, health consequences aside, one must try poutine when in Montréal as it is as Québécois as crumbling, suspension-busting roads and hot women. And thus I dug into my serving of poutine with a plastic fork.

It actually tasted “not bad” (as I said to my new Indian friends in a tone as enthusiastic as, say, a hospital patient could muster upon learning that he merely had a heart attack instead of a stroke). In fact, I believe this fits the definition of “comfort food” in Canada—at least for those who are comfortable ingesting large amounts of lard and trans fat.

Below are more photos of food I have tried in Montréal (I will be adding more photos to this as I eat out more in the upcoming week). Fortunately, this city is extremely cosmopolitan with a plethora of cuisine from different cultures and about 1,234 restaurants on every block, so one does not need to eat solely the quintessential Québec faire (which at the moment I am not sure includes anything besides poutine). For example, the other day I had some tasty Cantonese food, and tonight at the behest of a friend I had a most excellent (and at CAN$3.25, cheap!) spicy meat pita from the Lebanese restaurant Al-Taib (which is just one block from my sublet). Thanks, Kathleen!

May 13, 2008 (Tue): It turns out there are authentically Québécois dishes other than poutine! I found this out when I went out with my friend Sylvie—the pretty, French blonde I met in the 2006 Mardi Gras Marathon—for a bite to eat.

This is what we had:

You're welcome! By the way, Montreal isn't the capital of Quebec. Quebec City is! ↩ Reply

Thanks, Kathleen! I knew I should have done more fact checking; I made the correction now. Anyhow, I'm looking forward to trying the other eats you suggested! :) ↩ Reply