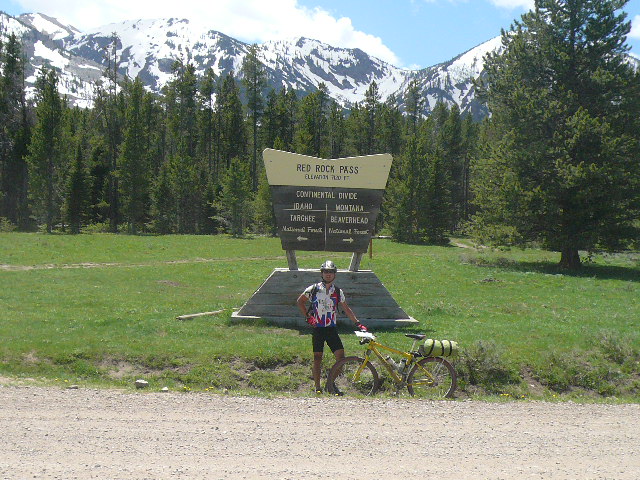 Felix Wong Having a Great Day

Hi, this is Felix Wong calling on Sunday, June 22nd 2:38 p.m. I’m just west of Big Springs, ID. I finally made it out of MT. It has been a gorgeous day. Great weather unlike yesterday. Yesterday was very hot with armies of blood sucking mosquitoes swarming on me anytime I would stop.

But today has been absolutely gorgeous. This part of ID is really beautiful. This has probably been the most enjoyable day of the Tour so far. I’ve been taking it easy all day just because I’ve put in a pretty hard effort the last 4 days. It has been nice not having any major climbs today.

A couple of coincidences I would like to mention: yesterday at Lima right after I called in a woman got out of her van and ask me if I was Felix. Then she handed me a phone. I thought that was pretty funny. It turned out that it was Mike Dion’s mother who had a friend by complete coincidence who was driving from Salt Lake City to Montana (they were moving) and by complete coincidence was passing through Lima. She found me in the parking lot and apparently knew I was Felix.

Then, today when I crossed into ID I saw a guy named Rich. He was wearing a Fat Tire Jersey. Fat Tire is made in my hometown of Fort Collins, CO. So I really enjoyed seeing that and we talked. I met his brother-in-law, Todd and Todd’s lovely daughter, Chelsea. We talked for a bit. It has just been an all round pleasant day and I hope it continues that way.

I’ll call in later. I’ll talk to you later. Bye.

Felix Wong Thanks Everyone for their Messages
Submitted by sherry on June 22, 2008 – 3:57 p.m.
Racer update about: Felix Wong

Hi, this is Felix Wong calling again. I’m still in Big Springs, ID. I just wanted to thank every one for leaving messages on the blog or text messaging me. A friend of mine has been reading them to me. I really appreciate the support. I just wanted to thank you all. Hope you are having a good weekend and a good time following this race which has been very exciting for me. I hope for you too. You guys take care.

HI this is Felix Wong. I’m calling at 10:50 on Sunday, June 22nd. I’m actually at the Ashton-Flagg Ranch. I think that is the name. Just west of the WY border.

I rode about 118 miles today. Great day. Amazing scenery, amazing weather. The only thing that dampened the day was (laugh) at the end I got lost. I made a turn I shouldn’t have and I added on about 6 miles. The sad thing was I also added on my most difficult climb of the day which was completely unnecessary.

But I ultimately got back on the course and got to this ranch. Got a room at around 9:45 and took a shower. It’s been nice. Everything is going well. My legs feel really good. I took it easy today. I understand that the Tetons are going to be a lot more difficult, so I should be ready for them, hopefully. I’ll talk to you later. Bye. (recorder time: 2008-06-22 23:53:34 EST.)