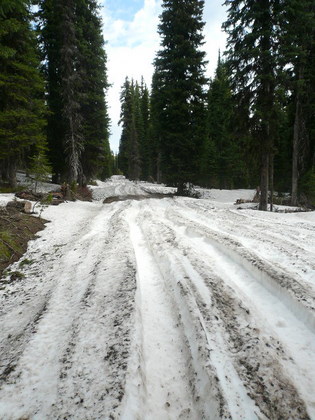 Felix Wong Fights the Mosquitoes and Flats through the Snow

Hi, this is Felix Wong calling at 2:24 p.m. on Monday, June 23rd. I had a hellish morning. Today, I woke up and I pumped up my tires. My rear one was really low on air. Makes me wonder how long I had been riding on a flat tire. So anyhow, I changed the tube in that and went about a mile and got another flat. I tried using one of my spare tubes and that one also had a flat. Long story, I now have one spare tube after having what I thought I had 4 good spare tubes but apparently one of them was faulty in that tube pack.

Then on the way to Flagg Ranch there’s that long climb. The climb actually wasn’t too bad. At the top, there was a lot of snow, a lot of mud, and thank goodness that most of that was on the downhill portion. The worst part was mosquitoes. Anytime I would get off my bike and be trying to push it through the snow, they would converge on me. Even though I was wearing clothing from head to toe, I got bit a lot of times. They can bite right through my cycling jersey and my arm warmers. I have been using bug spray but the mosquitoes are just really vicious out there.

I also had massive chain suck where my chain would not release from the chainring. I ultimately fixed that by using a stick and some creek water to clean my chainring and then re-lubing the chain. I still have some chain suck, which was not good because I would be walking and then trying to escape from the mosquitoes, I’d get on my bike and I’d be cranking away and then my chain would get stuck and then I would have to stop and the mosquitoes would get me.

Hi, this Felix Wong call at 9:00 p.m. I am just at the Junction of 287 and the gravel road that goes to 287. I’ve gone 92 miles today. I was really climbing well since the last time I called, which was at Flagg Ranch. Just feeling super strong and then I got to this intersection just to make a phone call to a friend; came back and guess what, my rear tire is flat again. So I only have one spare tube—hopefully that’s good.

The good thing is that where this happened is right next to the lodge. I’m staying in the lodge even though the rooms are $141.00. But I’m only doing this race in once in my life. So I’m here. I’m going to try to repair all of my tubes and then hopefully make it to Pinedale for a day and half or so and pick up more tubes there.

That’s my situation. I’m kind of bummed—I could go on. I was actually planning on going on to Brooks Lake. But I guess 92 miles on a difficult day starting late with flat tires is not too shabby so I guess I’m not too disappointed. Talk to you later. Bye. (recorder time: 2008-06-23 22:06:15 EST.)

Hi, this is Felix Wong calling at 11:15 p.m., Monday, from Togwotee Mountain Lodge NW of Jackson. I just wanted to give an update on my flat tire saga.

I found the root cause of all of my flat tires. It was rim tape not applied properly. Some spoke holes were exposed causing all of my flats. So now I consider it quite fortunate that I got a flat tire right in front of this lodge where I could stay for the night and diagnose this problem.