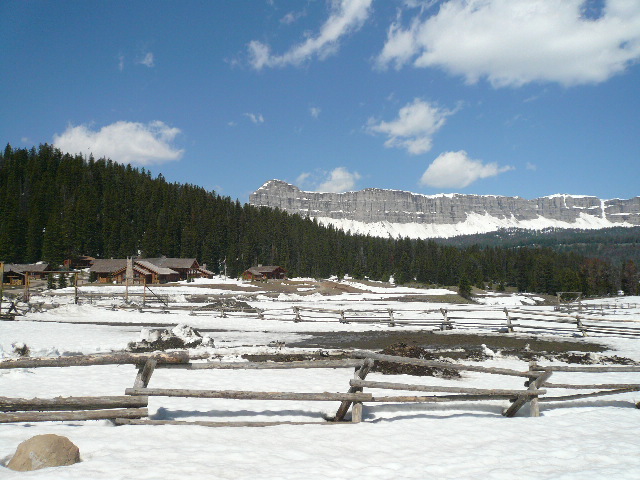 Felix Wong Fights Mud along the way to Brooks Lake

Hi, this is Felix Wong calling in at 1pm on Tuesday, June 24th. I just got over the Togwotee Pass in WY this morning. The pass itself wasn’t too bad but however the section beyond it by Brooks Lake was absolutely horrendous. Lots of snow.

Even worse that the snow was mud. There is so much mud that collected on my bike that both of my wheels seized. I had to spend a lot of time trying to clean up my bike. Just trying to get rid of enough mud so the wheels would start turning. I used a stick, my fingers. I tried dragging my bike through snow even, even when there were dirt areas adjacent to the snow. Just to try to get enough mud off my bike so that the wheels would turn.

I also tried to picking up my bike and carrying it however will all of the mud on the bike the bike weighed about 50-60 pounds so that wasn’t very practical. It took me about 2 hours 30 or 2 hours 45 minutes just to go 4.5 miles down to the Lake. After that I still had more bike clean up to do just so the bike was rideable.

I also had a front brake problem which I had to fix which was quite difficult when there’s mud all over the place. I think the bike is rideable again. It had a lot of chain suck; I tried to remedy that.