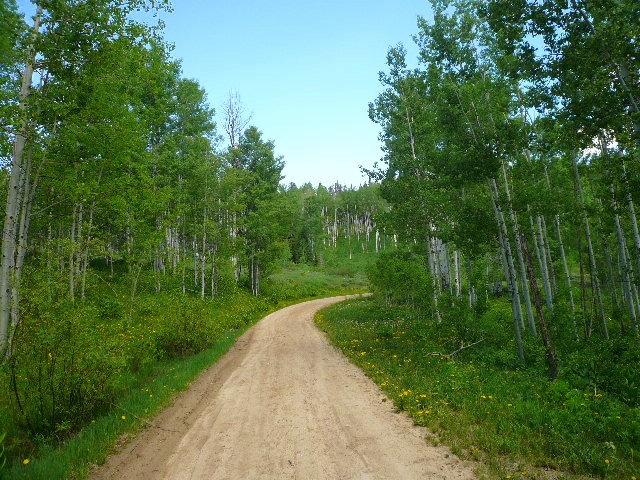 Felix Wong getting his Bike repaired at the Orange Peel

Hi, this is Felix Wong calling at 3:38 on Saturday, June 28th from Steamboat Springs in Colorado. The last two days have been pretty good. My legs have not been there but at least I’ve been riding through some spectacular scenery, both in southern Wyoming and then into Colorado, which I got into yesterday. It has been nice to be back in my home state.

Yesterday, I started really late. I was out of Rawlins by about 9:15 a.m. And again, my legs haven’t been strong at all. But I pushed on until about midnight. Got in about 97-98 miles. So I’m pretty happy about that.

At 9pm in the Route National Forest, I heard someone yell out “I’ve been waiting for you”. It turned out to be a woman named Kirsten at a lodge in the Route National Forest who had been following the race online and had met some of the other racers already. It was great to see here. I was able to get some water from her. I camped out in the forest.

This morning I woke up late again. I got started about 8:25 a.m. The pass up the Watershed Divide had snow and mud on there. Very slow going, but I would probably had to walk anyhow just because it was really steep and my legs had not been strong at all. The road to Steamboat was absolutely gorgeous. I just wish I was feeling stronger.

I’m now at the Orange Peel bike shop. They have been doing a lot of work on my bike while I have been resting and I really appreciate everything they have been doing for me. They are replacing the brake pads, both of the tires, putting on new rim tape, trying to make the shifting as smooth as possible. I have been having trouble shifting the rear. A lot of effort has been needed to shift that. My right thumb is getting very sore.

Felix Wong thanks everyone for their Support

Hi, this is Felix Wong just calling with a continuation of my last message. I just wanted to thank everyone for the messages that they have been leaving on the website. I really appreciate all the support.

And I wanted to give special hello to Kevin Hall and his family. A couple days ago the second half of the race started for me and I reflected on the first half, and the first few days of the first half and riding with you Kevin. Every time I go up one of these passes I almost expect you to hop out of nowhere and pass me on the climb. Anyhow, be assured that you and your family have been in my thoughts.

Thanks to your daughter for leaving her message. I camped out in the Route National Forest last night and I did resort to the bear proof camping strategy. Luckily I was well hydrated for that and I wasn’t bothered by any animals. Hope you are doing well in Kentucky and you take care. Bye.
(recorder time: 2008-06-28 16:44:53 EST)