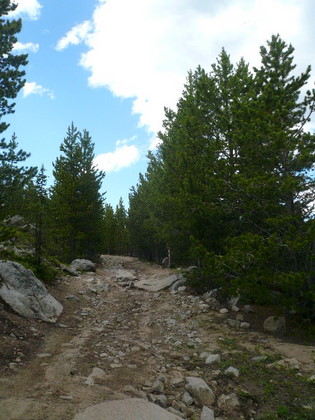 Hi, this is Felix Wong calling at 12:45 on Thursday, June 19th from Helena, Montana.

Yesterday, I had a great day. I was feeling stronger than I ever had been all week and was climbing very well.

In contrast, today has been pretty terrible. First I was descending and then a bird flew right into my spokes and I think the bird is dead. Sorry about that.

Then shortly after that, I pulled my left hamstring and consequently I had to walk up from the next two divide crossings. And during that time I thought my ride was over. My left hamstring was really in trouble. I thought I popped a vein or something like that. Thank goodness that was it.

I got back on my bike at maybe at about 10 a.m. this morning. I think I can manage. The hamstring actually feels a lot better.

I’m going to press on and hopefully I can make it to Basin and sleep in a real bed and take a real shower for the first time in a week. I’m feeling pretty gross right now. I’ll talk to you later, OK bye.

It was just an incredibly difficult day. Every day there has been a difficult climb or multiple difficult climbs. But today was the mother of all climbs. The climb between Helena and Basin was just unbelievable. It was super long, super steep, very sandy, lot of cars passing and kicking up dust. Then at the top it was a very rugged, rough, technical climb and I basically had to walk both up and down that.

Yah, man, uh. Then I got lost by a few miles. Then even on the road back down to Basin, even that was really rough. I took a spill once. Fortunately, didn’t break anything of my bike or body.

I’m just glad to be in Basin now. I managed to find a motel. It’s not really a motel; it’s a disbursed collection of units in town. I got one of those units even with a washer and dryer. I’m going to wash my clothes. I’m probably going to have a late start tomorrow. I’m just going to enjoy my shower and that’s it. I’ll talk to you later. Bye.