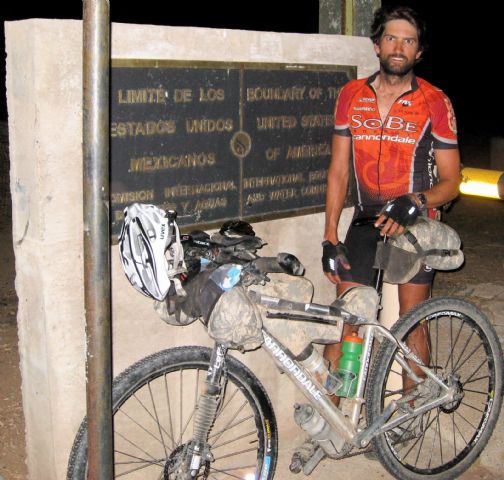 I was perusing the official Cannondale site, not that I am in the market for yet another bicycle any time soon, but because I was curious as to whether some of their newer models had any technology that would address some of the problems that afflicted mine (e.g., chainsuck) during the Tour Divide mountain bike race.

I’m still unsure of that, but I did come across a nice blurb about the Tour Divide and about winner Matthew Lee.

Ask people on the street who the greatest endurance athlete is in cycling, and most will respond simply: Lance.

We posit that they’d be wrong. Dead wrong.

Next question: What cycling event is longer than the Tour de France, is completed in fewer days, raced at a higher elevation, has no doping scandals and zero little coverage, even in niche cycling media?

Once again, SoBe/Cannondale rider Matthew Lee won the race, completing the route (without support!) in less than 16 20 days. To accomplish this feat, his machine of choice was a Cannondale’s 29’er.

To learn more about this race and the astonishing handful of riders who participate every year, visit the race’s official web site; to read about the route, please see Adventure Cycling’s page on the race.

Might I also add that Tour Divide’s course is also much more difficult than the Tour de France’s because over 85% of it is off-road, with steeper climbs and things like downed trees and snow to traverse. And that Matthew Lee is the undisputed God of the Great Divide Mountain Bike Route, having raced it far more than anyone else in the world.

The other Cannondale in the race, my yellow ’96 F700 hardtail, also demonstrated that even the company’s 12-year-old offerings are competent. The 26er was lightweight and rugged, and the DD50 HeadShok performed magnificently. I was particularly thankful for its lock-out feature requiring just a flick of the wrist. Beginning with Week #2 of the Tour Divide, I was locking out the fork on 90% of the uphills, enabling me to climb much better. I also locked out the HeadShok on all pavement sections so I could pedal out of the saddle without any energy being wasted on compressing the fork.

Kudos to Cannondale and congrats to Matthew!

Felix, I was going to email you about another bike related issue but reading your blurb on Cannondales I now have two questions..

I noticed you didn't run any barends on your bike...how did your hands fare throughout the race and would you setup your bars any differently next time ?

I am in the market for a Cannondae 29er and am fussing over what size frame to get, medium or large. I am 5' 10" with normal proportion arms/legs/torso. My Cannondale rep says I could fit into either a medium or large frame. How tall are you and what size frame is your Cannondale ? Cannondale's frame measurements are pretty much the same between it's 26" & 29" frames, ie: top tube length, etc.

Hi Joseph. Thanks for stopping by my site and for your comments.

To answer your questions, my hands went numb after Day 1. In fact, 18 days after finishing the race, my left pinky and ring finger are still numb (though it is encouraging my right hand no longer is). This is actually the first time I've ever got hand numbness, but I come from mainly a road cycling background.

I'd definitely set up my handlebars differently next time, using bar ends and "ergo" handlebar grips. I've already picked up a set of these:

The bar ends would probably help the most. I don't think my hand numbness was caused by nerve compression but rather wrist flexion (the cause of carpal tunnel for people who type a lot on non-ergonomic keyboards). In fact I suspect carpal tunnel is what I got. I suspect having bar ends would help prevent the wrists from flexing in that manner by rotating them 90 degrees.

The general rule of thumb is if you are in between frame sizes, go with the smaller frame -- lighter and stiffer.

Almost everyone in the Tour Divide used a 29er (I think only 3 of us rode 26ers). That seems to be the way to go for such a long x-country race.

Awesome effort. Must be so tough to do it in the time you did it in. Considering following the Tour Divide route across Canada/US but probably not in the race; would you recommend it as a good way of seeing American back country or would you favour an alternate route? I've not travelled in the US before.