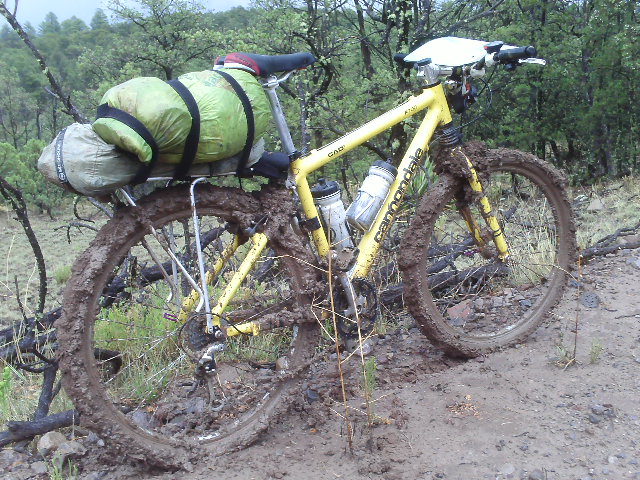 Submitted by sherry on July 8, 2008 – 3:51 p.m.
Racer update about: Felix Wong
Hi, this is Felix Wong calling from the Beaverhead Work Center. The last 24 hours for me has ceased to be a race. Instead it became a matter of life or death, of survival. After Pie Town, which I mentioned in my last message, was kind of a joke of town, with no services. I started bonking really badly. I lost my food supply really quickly. Thank goodness I encountered another cyclist heading northbound named Tim. He was generous to share some spaghetti which kept me going for a little longer.

I was really looking forward to getting to Old Horse Springs where there was supposed to be some sort of service station at the Junction at the trail head with Hwy 12. Once again, I was disappointed. There is nothing there. Just an old church. I was 113 miles away from the next supply point which would have been Mimbres. I had no food. It was a very dire situation.

For the next couple of hours, I went searching for food. I had no hunting equipment so instead I started looking for homes. The locals in town, a nice couple named, Jim and Norine, they provided me food very generously. They also provided me with advice on what to do about all of the wolves, rabid foxes, black bears and rattlesnakes out here. Thank goodness I haven’t had any close encounters with those.

This is Felix Wong with a continuation of my last message. So I was fixing the rear tire and apparently two of my spares were not good. I either pinched the tubes when I was replacing it in the rear tire or they were just faulty.

Finally after an hour, I managed to fix the rear flat. Unfortunately, my air pump seems to be dead. There is a slight chance I might be able to get it working again. Failing that I have used my last CO2 cartridge to fix the flat. I have no more good spares. I’m down to one patch. Its pretty dire, I’m hoping that I can get to Silver Springs (he means Silver City) with no more flat tires. After this phone call, I’m going to give Gila Bike shop a call in Silver Springs and try to have them leave some tubes outside if I pay with credit card.

Anyhow, I’m about 50 miles away from Mimbres. I think I have enough food thanks to Jim and Norine. About 75 miles away from Silver City, where I hope to get some supplies in case of a flat. I really hope I can make it.

It’s been a trying experience and I can fully image what the Joad family in the John Steinbeck’s great American novel Grapes of Wrath were feeling and going through. They were on a journey, desperately trying to get to a destination, suffered setback after setback after setback, and tried to maintain a glimmer of hope and human dignity. That is what I’m just trying to do. I’m trying hard to stay calm and hold it together. It has not been easy. It has really not been easy. Bye.
(recorder time: 2008-07-08 13:15:02 EST)