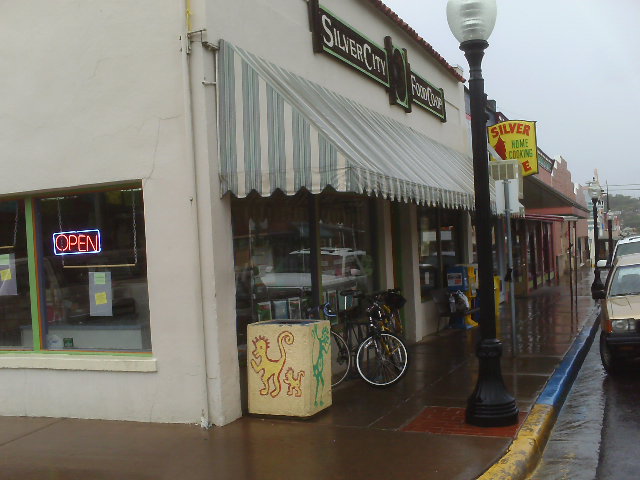 Submitted by sherry on July 9, 2008 – 12:07 p.m.
Racer update about: Felix Wong
Hi this is Felix Wong calling from Mimbres, NM at 11:25. I’m here a lot later than planned or expected, but quite frankly I’m happy to be here at all. There have been many times during this race when I thought that there is no way this race could have gotten any more difficult, any more traumatizing, but let me tell you the last 24 hours starting roughly half an hour after my last message have been incredibly difficult.

Anyhow, I’m in Mimbres stopped by the first store I seen in 200 miles, eating food right now. I’ve listened to all of your messages. A dear friend has been reading them to me, leaving them on my voice mail and I really wanted to thank you all for your message and support —
(recorder time: 2008-07-09 12:35:45 EST)

Its 11:40 Monday [I mean Tuesday] morning. I’m hanging out here and eating as much as I can. Like I mentioned in my last message, I was bonking really badly. I was down to my last bag of peanuts which doesn’t have that much carbs. I went through all of them. I can’t image that eating two pounds of peanuts in one day is good for the body but you have to use what you have and that is what I had.

I hope to carry on to Silver City within the next half hour. I might have to stay there tonight. I was hoping to be a lot farther than that. Given my condition, it might be wise for me to stay there overnight and make the final push tomorrow. I’m hopefully going to make it Silver City tonight. Pick up my tubes I purchased from Gila Hike and Bike, fix my flat, see how I feel. I may carry on. Right now it looks like there is no way I’m going to get to Hatchita tonight. I [might not] even be in Silver City tonight. [If not] hopefully I’ll get there tomorrow. Bye.
(recorder time: 2008-07-09 12:43:10 EST)

Felix Wong in Silver City for the Night

Hi, this is Felix Wong calling from Silver City, NM at around 6:30 on Wednesday, July 9th. Today I was bonking really badly in the morning. Thank goodness I got to Mimbres and was able to get some food and made it over the gravel trail heading from Mimbres to Highway leading to Silver City. Had to walk up most of the hills. It was hot and humid, but slowly and surely my legs returned from the dead and I was able to go up grades more than 1 to 2 percent again.

I got on the highway and almost instantly it started pouring. Its been raining consistently all of the way until I got to Silver City. When I stopped by Gila Hike and Bike to pick up the supplies I ordered yesterday, the folks over there, including Bill and Jay, were very helpful. They helped me do a couple of bike maintenance things. For example, Bill helped clean up the shifting and over there I replaced the rear tubes with one containing slime. I hope that gets me to the finish.

After that I went to the food co-op to buy some groceries and it was almost disorienting going into a real grocery store for the first time in several weeks instead of a convenience store. I think after this race, I’m now addicted to Coke and donuts. They don’t exist in a food co-op; go figure.

Anyhow, it’s still raining and I’m baggin’ it for tonight. I was hoping that the rain was going to stop and I’d probably press on but I’ve had so many epic days the last couple of days and I don’t think mentally I could handle another one in the rain. I’m staying here at a nice hotel.

Silver City is a nice progressive friendly town and I hope to wake up early tomorrow and finish tomorrow night, we’ll see. By the way, my SPOT tracker is still blinking red…
(recorder time: 2008-07-09 19:28:30 EST)

Hi this is Felix Wong. I just wanted to remind everyone that my SPOT tracking device is blinking red. I’m not exactly too sure what that means. I suspect that that means my battery is dying and hence, I’m only turning it on when I get to major points. So I have it on now. Hopefully that updates my blue dot on the internet. I’ll probably turn it back on in Hatchita. Don’t be alarmed if you don’t see the blue dot moving.

I do intend to start really early tomorrow morning and barring disaster, it seems like I been having quite a few issues coming up, but barring disaster I should be making good progress tomorrow. Its more than 50% pavement. Hopefully the next time you hear from me, I’ll be in Antelope Wells. You take care everyone and thanks again for all of your support.
(recorder time: 2008-07-09 19:30:24)

Hi, this is Felix Wong calling on Wednesday, 9:20 from my hotel room in Silver City. I’ve replaced the batteries in the SPOT tracking device. Thanks to Sherry for letting my friend know. It is tracking and it should show my position. Hopefully my blue dot will get to Antelope Wells tomorrow.

Right now its still pouring buckets of water and rivers are flowing down streets. I presume when I wake up tomorrow morning that the roads are going to be wet. At least the first 20 miles are pavement. I’m keeping my fingers crossed that nothing terrible happens tomorrow and that I have good news the next I call in. Talk to you later. Bye.
(recorder time: 2008-07-09 22:22:43 EST)