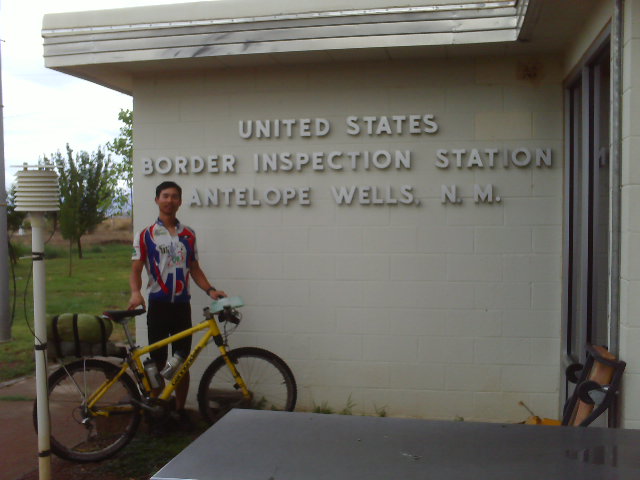 Hi, this is Felix Wong calling on Friday, July 11th at 8:23 am. Yesterday when I departed Silver City at 4 a.m., I was expecting a great day but it certainly did not come in the morning. When I reached the very sandy trail, there was yet another monsoon, pouring rain, lots of fog. I was making very slow progress even though my legs were feeling good.

The low point was certainly when I swore I was lost and off course because I was not seeing a number of landmarks noted on the map. As it turned out I was actually on course, but for me to figure that out I had to backtrack three-and-a-half miles until I encountered a windmill and corrals which were enshrouded in fog earlier in the morning. That was actually quite a joyous moment for me, but means that I lost about an hour or hour and half by needlessly backtracking.

When I got to pavement it was another moment of joy. From there, which was about another 70 miles, I pretended it was time trail in, say, a half-Ironman triathlon. I just cranked away, pretty much did not stop even though there was another monsoon, which this time at least I was on pavement so it did not bother me. All it did was it helped clean up my bike for photos.

It did result in yet another squeaky chain. Because I has used all of my chain lube in the morning thinking it would get me to the end, I resorted to using the oil of Vitamin E capsules to lubricate my chain for the last 30 miles, thereby becoming the first Tour Divide racer to feed his bicycle vitamins. Probably the first cyclist in the world to do so. That is how much I love my bike.

This is Felix Wong with my final thoughts. Once again I arrived here in Antelope Wells on Thursday, July 10th at 8:37 p.m. Meaning that I finished in 27:10:37.

I am still in disbelief that I’ve made it. Actually we made it. When Kevin Hall decided to go back to his family in Whitefish, I swore that I would be riding for the two of us. Here we are Kevin, we made it to the Mexico Border.

I was also riding for everyone who has supported this cause. Either writing messages of support to help keep me going. I really want to thank you for that. I want to thank especially my friend Tori who was reading messages to me, giving me updates, offering unwavering support. My mom, dad and family. My friends from Fort Collins, CO and all over the nation. Of course, the other Tour Divide racers, those in front of me or in back of me who were a joy to see even though I really only seen a few of them after the first day at least.

Everyone, thank you so much. It was an amazing journey. Again, I’m still digesting what has transpired. It has been epic. It has been an honor to be a part of the inaugural Tour Divide. It is highly unlikely in my lifetime I will be part of something quite so exciting, challenging, long but beautiful as well. Thanks again and I may call back with some more final thoughts.
(recorder time: 2008-07-11 09:34:10 EST)

Hi, this is Felix Wong with Part II of the Final Thoughts. So I’m in Antelope Wells. I’m going to take a shuttle up to Lordsburg. Hopefully be back in Fort Collins in no more than 2-3 days. It is probably going to take two days by Greyhound.

Now it’s time for me to detox and rehabilitate. The race has definitely taken a toll on my body. I’m not just talking about the very unfashionable tan lines that I have gotten but also the amazing amount of junk food that I consumed. As I had promised in my letter of intent, I did consumed more processed food in the race that I had all year. In fact, I think I consumed more processed foods during the race than I had in last three years.

One thing I was completely wrong about in my letter of intent was being prepared for monsoons and thunderstorms. I was completely and inadequately prepared. I always thought that the snow and the cold would be my nemesis. It was certainly the rain and all of the mud it caused. Of course, the race presented numerous other challenges including the snow, downed trees, sections that were death traps because they are so exposed and we had to traverse over them without any ice axe, crazy climbs.

But again the course amazingly beautiful, going by all of the mountains, through the small towns. I believe the largest town we went through was Butte, MT. MT largest town which only has about 30,000 people. Most of the towns only had a few hundred people some even less like that joke of a town, Pie Town. I still can’t believe there was nothing there.

Anyhow, its been an amazing journey. One I will definitely remember for the rest of my life. I’m glad you got to share in this experience, watching on the internet. I hope it was as exciting for you as for me. I promise to write all of you back as soon as possible. Take care, next time I report….
(recorder time: 2008-07-11 09:39:31 EST)

This is Felix Wong with Part III of Final Thoughts. So the next time I report I will probably be in Fort Collins. Before then I wanted to wish Mary, Stephen and the remaining Great Divide racers best of luck in finishing. I wanted to congratulate the finishers of both the Tour Divide and Great Divide Race. Congratulations to Matt Lee and John for winning their respective racers. It is incredible what you have done. Especially in the short amount of time, you were able to ride all the way from Canada to Mexico, a lot quicker than me.

I’m just happy to be here. Be done. I’ll be sure to post some photos and write-ups on each of my day’s rides on my website. My website is www.felixwong.com. I should be posting that in the next week or so after I return back to Fort Collins. In the meantime, everyone take care.

I’ll be replying to you email soon. I can’t wait to catch up on e-mail. It is amazing, I think this is the longest I have gone without internet access or access to the news. Right now I’m wonder who won the NBA finals (was it the Lakers or Celtics), did John McCain or Barrack Obama pick VP candidates, did Jessica Alba have a baby yet. Wondering things like that. I guess I’ll have plenty of time to catch up, especially on the bus ride home. I’ll be talking to you all soon. Take care, Bye.
(recorder time: 2008-07-11 09:43:03 EST)

Hi, this Felix Wong calling at 3:36 on Friday, July 11th with one final update. This morning, I took a shuttle that went from Mexico to Lordsburg. I boarded that in Antelope Wells. Got to Lordsburg in the morning. From there I went two blocks to the Family Dollar Store and bought three rolls of packaging tape, some twine and picked up about a dozen cardboard boxes. Fashioned a bike box from that. Put my bike in there.

Now I’m on a greyhound bus. Unfortunately, my bike won’t be able to make it back to Fort Collins until maybe the middle of next week. Funny thing is I left the SPOT tracking device on my bike so we should know exactly when it gets back to my home. But I’ll be back home tomorrow, Saturday morning, I can’t wait for that.

I have a new appreciation for many things. For example, real beds, showers, motorized transport, toilets, even outhouses, that sure beats digging a hole with my shoe and squatting down in the forest. Little luxuries like that I will never take for granted again. That is one of the benefits of doing this race.

The race was overall a great experience with all of its trails and travails. I wish Mary and Stephen, best of luck in finishing also. Don’t ask me if I will ever do the race again. I probably won’t but it has been a fantastic experience. Thanks so much and take care, bye.
(recorder time: 2008-07-11 16:39:59 EST)