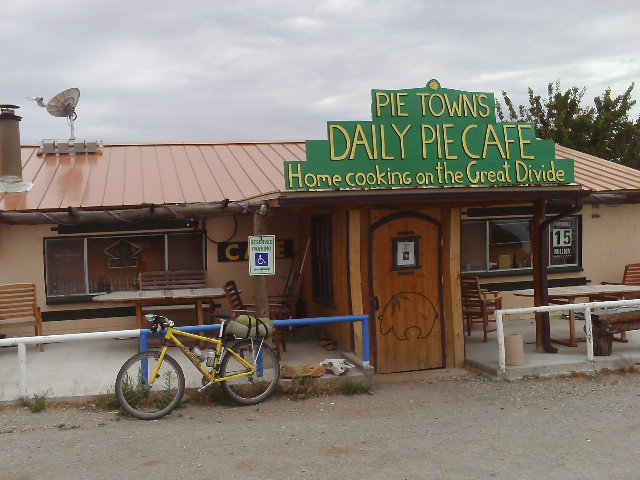 “Hi, this is Felix Wong again calling from Pie Town,” I reported when I did my daily Tour Divide call-in on Day 25 (July 7). “It’s now 12:17. I’ve just wasted half an hour looking for any type of services out here. I’ve found two restaurants. They’re both closed. Unbelievable. It’s Monday at noon, I’m standing right in front of the Pie-O-Neer. The Pie-O-Neer apparently is open only Friday, Saturday, and Sunday. The Pie Cafe—it’s closed also.

“I’ve asked a bunch of the locals about where I could find food and water. It looks like I’m out of luck. Extremely disappointing. I’ve biked 70 miles [to get here]. I’ve been up since 4:00 am; I started riding at 4:30. I’m tired, hungry… and there’s nothing here. No food for another 40 miles which will take me about, you know, 7 hours on these really sucky roads. It’s a sad town. I’ve biked 2,400 miles now and I haven’t seen a sadder town. I’m sorry to say that. But those cyclists who have yet to come to Pie Town, be prepared and preferably, stock up on food in Grants. Stock up as much as you can. There’s nothing here.”

One could have accused me of being unfairly harsh towards Pie Town, but my call-in did capture the level of frustration I felt while being tired and hungry at the time. In fact, I must have sounded so pathetic and bitter about not being able to get a piece of pie (or anything) in Pie Town that no less than two people offered to buy me pie after the race.

One was fellow Tour Divide racer Kevin Hall even wrote on the official TourDivide.org blog,

I’m afraid your outta luck there in Pie Town NM. You might have to settle for some “road pie”…. arrrgh!!!!! You finish this thing out in style and I’ll treat you to a pie buffet as you watch those raunchy South Park episodes.

I might have taken him up on that offer but a few days after I returned home to Fort Collins, Tori bought me a pie made with organic apples from Whole Foods. I was going to eat it while doing my “South Park Marathon” except that I decided that even in my grossly underweight state, a whole nine-inch pie was too much for me.

So instead, I went over to the neighbors’ to share it with them:

Anyhow, thank you Tori for the pie—it was delicious, not too sweet, and probably the healthiest an apple pie could possibly be. And thanks, Kevin, for offering a whole pie buffet even though that is now no longer necessary now that I got my pie!