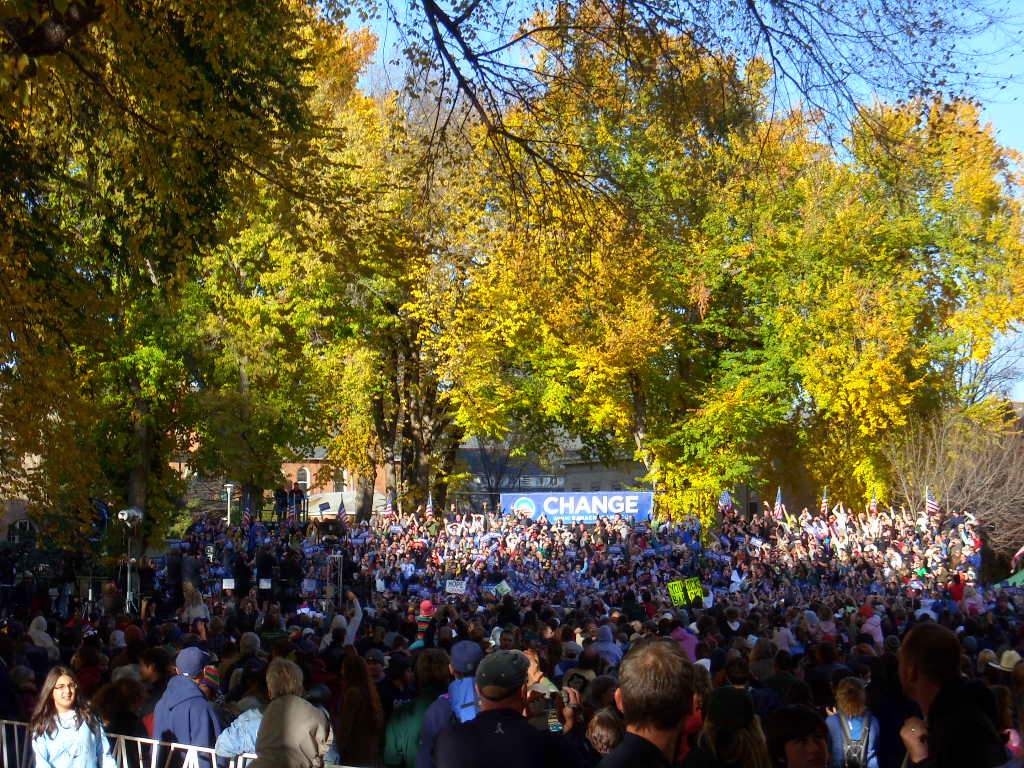 Fort Collins has been described as “the purplest city in the purplest state” and a swing town that could really affect the national presidential election. I used to think that was a bit of hyperbole, but maybe there is some truth to it.

“If Fort Collins didn’t matter, I don’t think Barack Obama would be here today,” said a community organizer warming up the podium at the CSU Oval for Obama today. “If we win Fort Collins, we win Colorado; if we win Colorado, we win the election,” he said.

It was a big day for both Obama and Colorado, with his largest crowd ever (>100,000 people) being in Denver and, just hours afterwards, an estimated 45,000-50,000 more showing up in Fort Collins. Contrast that to poor John McCain getting fewer than 1,000 people at a rally yesterday morning in Albuquerque, NM, a city with a population similar to Denver’s.

Anyhow, in Fort Collins, it was a zoo! Here are some excerpts from an e-mail I sent to a friend after I got back home:

Obama was in Fort Collins today! He gave a 30-minute speech. It was pretty crazy—first, while biking over to CSU, I and others got stopped by police at Mulberry St., because Obama’s motorcade was coming. So I got delayed by 15 minutes but was able to wave at his bus. But then, the line to the oval snaked around campus for over a mile. At first the line was crawling, but then security stopped all screenings and I got in 5 minutes into Obama’s speech.

His speech was 30 minutes long. Apparently, it was also on TV because 5 minutes after the speech, a friend in Stockton gave me a call saying that he saw the speech on CNN. Did you see?

Obama even complimented Fort Collins:
“Thank you CSU! This is pretty out here. I should’ve gone to school here,” he said to the sea of people. [Denver Post]

You can read more about the event in Fort Collins Now.

very cool that he came to visit FC! and quite a crowd that gathered! ↩Reply