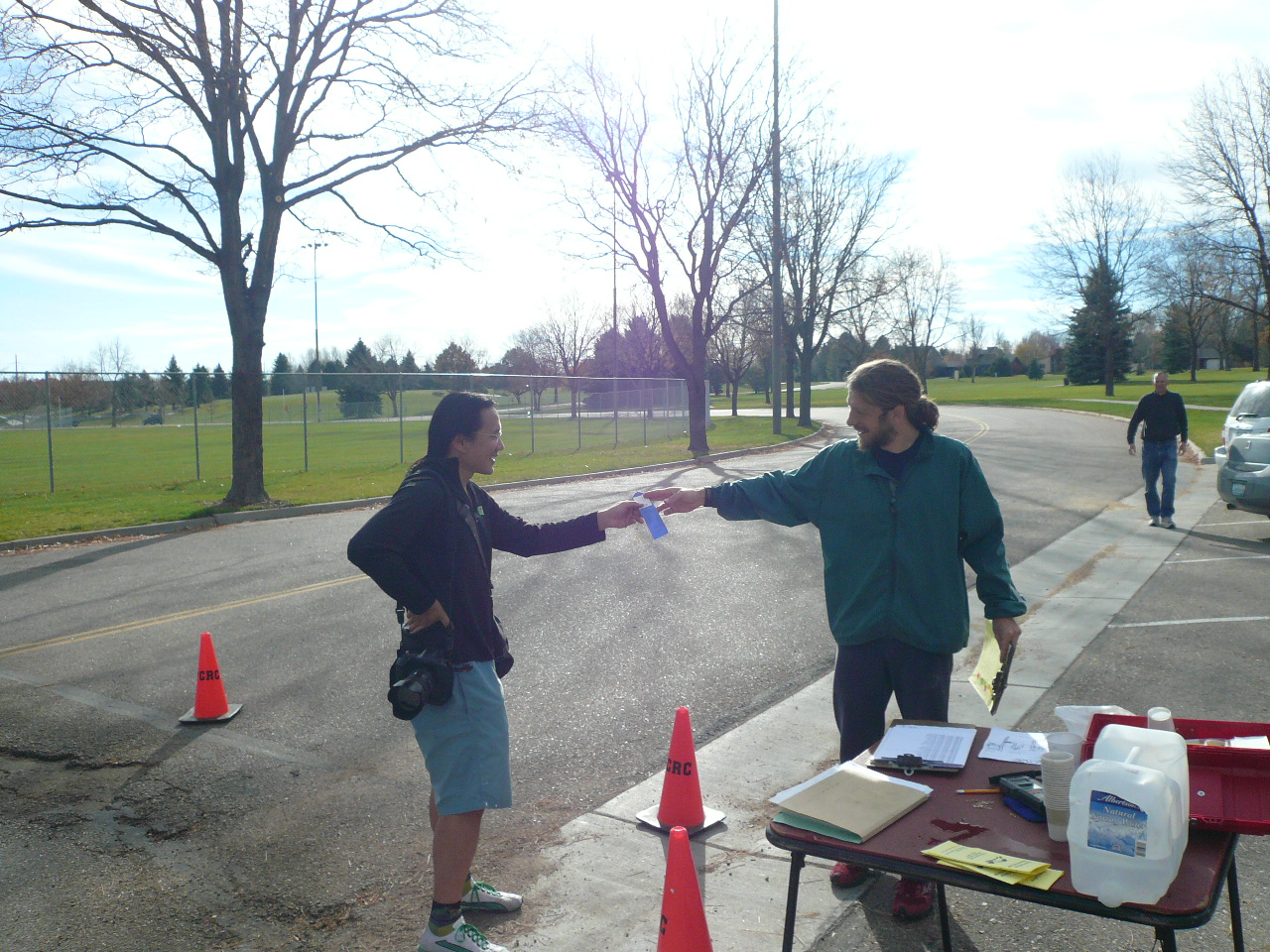 The Edora Park 8k is part of the Fort Collins Running Club‘s Tortoise & Hare Series, which (with its staggered starts according to runners’ respective speeds) is a “handicapped” race. Today’s race, however, was even more handicapped than usual.

Take Chris and Tom, for example. They raced in a half-marathon in Loveland yesterday. Both of them noted that their inner thigh muscles were sore.

Then there was Alene. One-and-a-half days ago, on Halloween, she ran 50 miles. No, that is not a typo, not 5.0 miles, or 50 kilometers (which still would have been a lot). She didn’t say if her legs were sore or not but if it were me, I probably would have arrived in a wheelchair.

Nick also raced yesterday. He won the Heart Center of the Rockies 10k race in Loveland with a smokin’ time of 37:29. However, today he was the race organizer, so he didn’t have to run.

And then there was me. Since the Sulphur Springs 100 in May, I have run a grand total of 55 miles. Fifty-five! Alene ran that much in the last 36 hours.

All this made the race ripe for the picking for any newcomers to the race. For instance, my good friends Adam and Rae from California.

Adam and Rae were visiting for the weekend after days of campaigning with Jared Polis, a friend of Adam’s from middle and high school who is running for U.S. Congress in the Boulder area. Somehow I managed to rope them into doing this race with me; fortunately, they had brought their running shoes to Colorado. They really weren’t sure what their pace would be for the race, so when Nick asked them for an estimated mile time, they said “ten minutes.” This put them in 3rd or 4th position in the starting order.

In my case, I started last. Knowing that I hadn’t run very much lately, I tried to start out a little slower than I normally do, and yet I was already breathing hard by Mile 2!

I did already catch two runners by then, so I thought I wasn’t doing that bad. Never mind one of those runners was Tom, one of the aforementioned handicapped-due-to-running-a-half-marathon-yesterday runners. But by the halfway point my time split was 16:30, so I was on pace for a respectable 33-minute 8k time, if only I could keep it up.

I could not. My breathing and stride were just too strained, and it was a struggle just to catch Chris who was only about 200 meters ahead of me at the halfway point. My final time was 34:04—good enough to be the “male hare,” but about two minutes slower than my best time at this race (32:10, one year ago). Hmmm, a good data point for what happens when one does not run for six months.

To add insult to injury, both Chris and Tom reported their GPS units measured the course at 4.78 miles. So it wasn’t even 8k (5 miles).

Meanwhile, Adam had a great day. After the turnaround point, he sped up and finished in under 41 minutes—much faster than “10-minute pace.” So, due to the staggered start system, he won! Both he and Rae (who finished 4th or 5th) got ribbons.

Afterwards, most of us went to Gib’s Bagels for a scrumptious breakfast. It was good to sit down and catch up with the others over bagels and egg and cheese. After all, if we were already handicapped before the race, we were especially so afterwards.