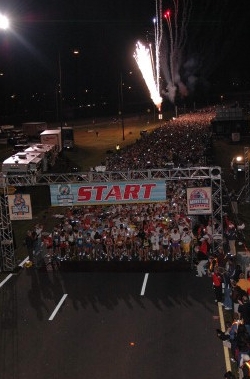 By the time I had picked Craig and his friend Erik up at their hotel to head over to the start of the Disney World Half Marathon, my laryngitis-afflicted voice box still were unable to croak out words with greater clarity than a toad could. But at least during the mile-long walk from the parking lot to my wave start, my legs and lungs seemed okay.

“Hmmm, they feel much better than during the 1.4-mile run I did in Jacksonville on Wednesday when I had to walk midway through,” I thought to myself. Nevertheless, I started at the back of the corral, believing today was not the day to even think about running a fast time.

The first two miles, then, I was logjammed behind thousands of runners and averaged 8:45/mile pace. Ah, well.

But by Mile 3 I started weaving through the flock of runners, at times feeling like a thread passing through a needle’s head. Chock it up to impatience or a desire to have more fun.

Indeed, the next eight miles certainly were.

Around Mile 4.5, I was still weaving through the crowd but had caught up to a tall, attractive female runner in her mid- or late thirties sporting a pony-tail. Right then and there she picked up the pace and matched mine exactly (about 7:00/mile flat), with me about a step or two behind.

We ran like that for the next mile or two. Not wanting to appear like I was stalking her like some sick psycho, I then surged a little bit and passed her… but she stayed right with me.

We continued the you-pass-me, I-pass-you motions for the next 15 minutes until not long afterward, we passed Dick and Rick Hoyt. Then, we ran literally side-by-side for the four miles, sometimes even brushing elbows.

I had the perfect pace partner. My only frustration was that I was completely unable to talk due to my throat condition, but we developed a sort of unspoken alliance nevertheless.

Running through enchanted places such as the Magic Kingdom with my de facto partner (and still passing other racers) are my enduring memories from the race, places where adrenaline surged through the veins and I still felt fairly light on the feet.

Unfortunately, it couldn’t last. With one-and-a-half miles to go, my lack of training finally seemed to affect my stride, and the next thing I knew, the woman had opened up a 10 foot gap on me. She seemed to be surging, and I was faltering.

With a half-mile to go (which entailed making a U-turn around a cone), I could clearly see she had a 45-second or maybe even a 1-minute gap on me. My legs were definitely hurting and my breathing was laboring, but I was determined to make a dash for it try to catch her.

Too late! She ended up crossing the finish line 49 seconds before I did, so she must have turned it up at the end as well. Still, the finishing straight was really memorable as I sprinted by about two dozen people in a quarter-mile stretch, including nipping this guy at the line, below.

My final chip time was 1:35:57, which despite the slow start and laryngitis was my quickest half-marathon-only time to date. (But only because I haven’t run many half-marathons; I’ve actually ran the first 13.1 miles of some full marathons faster!) Not too shabby considering I lost at least three minutes in the first two miles and probably a couple more weaving through the crowds in subsequent sections.

Alas, despite running like a completely healthy person my voice wouldn’t return for three more days. Too bad; I would have loved to have found and chatted with the woman I was running with most of the race and totally chicked me at the end!