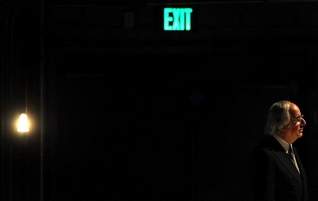 Back in December, Tori gave me a best-selling book written in 1970 she thought I’d like. A couple months later, I discovered that the author was coming to give a talk at the Lincoln Center in Fort Collins.

I ended up reading the whole book the same afternoon I made that “discovery.” Then a couple days after that, I watched the movie based on the book of the same name.

Yes, the story was that good. And so was the presentation.

The book is Catch Me If You Can and the author is the world’s most notorious confidence man, Frank Abagnale. This is a sampling of his criminal “achievements” (as chronicled in the book and movie, all before he was 19 years old:

While the above acts were certainly criminal, immoral and unjustifiable, it’s undeniable that Abagnale was a gifted man (even if he himself denied that in a show of humility). Fortunately, following his final incarceration in his 20s, he began working for the “good side” including working for the FBI without renumeration for 30 years, founding a company devoted to preventing identity theft, and paying back all the money he stole.

The first part of his talk rehashed much of his book for those unfamiliar with the story. (One difference: he said his infamous plane escape was achieved not by removing a bathroom toilet as claimed in the book and movie, but rather through the kitchenette of the plane.) Despite not getting much new information from that portion of the event, it was still worth hearing the story told from the man himself in a very smooth, self-assured way befitting of a former con man.

In the Questions & Answers session afterwards, Abagnale talked about many things (particularly in regards to his specialty and profession: that were not in Catch Me If You Can including the following:

Lastly, Abagnale asserted that “life is long” and urged us to spend a moment to think before doing something because one has to live with mistakes for a long time. He would know—it’s been more than thirty years since his criminal acts, and we are still talking about them.