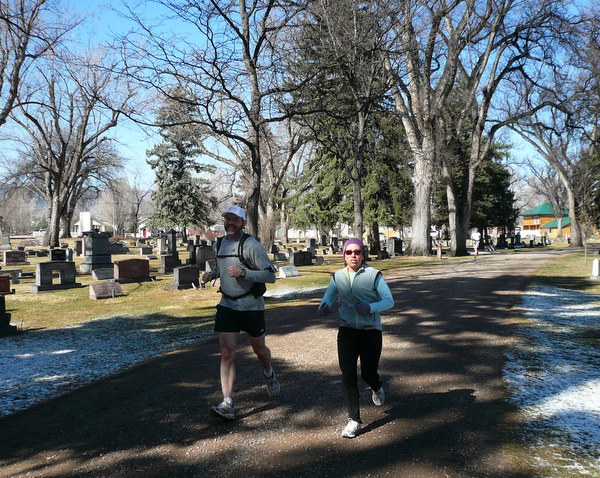 It was Alene’s 45th birthday and she wanted to do something special to celebrate this milestone. Being an ultra-runner who ran Badwater last year, she decided to run 45 kilometers or 28 miles. However, the location she wanted to run in was probably not a place you’d first guess.

It was the Grandview Cemetery in Fort Collins. Yes, a graveyard! It has an outermost road that is exactly one mile, which meant running 28 laps. Plus, it is rather peaceful—there is no traffic and usually the dead don’t bother anyone.

This was actually not the first time we ran here. That would be a six-degree day in January with one to two inches of snow on the ground. We ran six miles while Alene told me graveyard stories. It was fun.

Today was much warmer (near 60F) and beautifully sunny. Alene posted a write-up here. I ran the last 13.5 laps with her and her friend Jeff, which meant a 21.5-mile day for me as I had run eight miles in the morning at the Bud Center. We figured that I too had run a distance in kilometers greater than that of my age, but as my birthday is still a little ways away, I don’t think it counts.

Nick also joined us for some laps (he did a hilly run in Horsetooth in the morning already), and afterwards we went out for a b-day lunch at Rio Grande at about 3:00 p.m. It’s Mexican food was delicious, especially after eating only an apple, a banana, and a slice of carrot cake the entire day. At least Alene was better fueled than I—she had packed several containers of baby food and other goodies that she was able to munch on now and then at the graveyard.

It was a great day, even if the run location was a little unconventional!