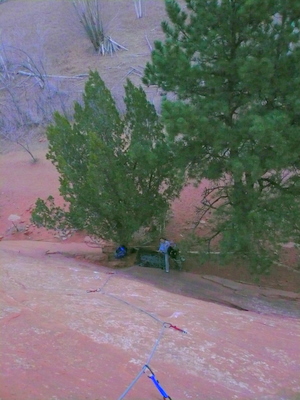 One of the great things about Colorado Springs is that there is outdoor rock climbing a 10-minute drive away from downtown. Or so I found out when I went to visit Lisa and Jeremiah on a reasonably warm (60F) and sunny March day and we went climbing at Red Rock Canyon Open Space.

We first stopped at Sayer’s Wall as the sun was still shining on it at around 4:00 p.m. The Pikes Peak route (no relation to the real Pikes Peak not too far away) was a good warm-up to lead as it was rated 5.7 with five bolts to two a solid two-bolt anchor. However, it was quite run-out, particularly the first bolt which was 20 or 25 feet above the ground. I tried not to look down as I smeared my way up the slabby sandstone as it was a long ways to deck if I were to fall before that first one.

We then headed over to Solar Slab, where Jeremiah lead Helios (5.7+), Lisa topped and cleaned it, and then I lead it. Fun route.

As a final climb, I lead Isis (5.10a) which was a doozy. Before the third bolt I took my first fall, and after futilely trying to smear my way up (left foot constantly slipping downwards on the sandy sandstone), I ultimately said “screw it” and grabbed the third quickdraw I had put in a few minutes before and pulled my way up. While that was probably the most blatant moment of cheating on that climb, it wasn’t my last, as I was racing against daylight (with my friends starting to get very cold down below), and I ended up stepping on the 5th bolt as if it was a legitimate foothold. After that it was no problem getting to the top.

Despite only getting three climbs in, it was a fun afternoon of climbing and I’m looking forward to heading back down to Colorado Springs to visit Lisa and Jeremiah and to climb. After all, climbing is not very far away from where they live, plus Daylight Savings Time will have kicked in!