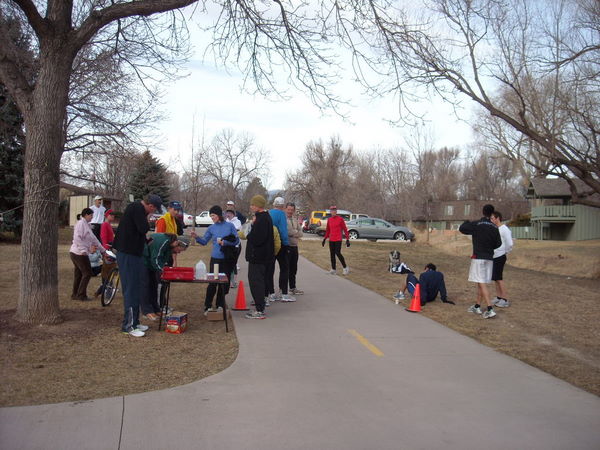 This morning—as is the case with most weekends in Fort Collins—I woke up faced with the choice of doing one of several runs happening concurrently. For example, there was a Horsetooth Circumnavigation trail run option of about 17 miles; a shorter Horsetooth option of about 11; and the Spring Park 6k, part of the Fort Collins Running Club‘s Tortoise & Hare Series. Which one to do?

Having decided before the year started that I would focus more on “short and fast” in 2009 than “going long,” I ended up picking the latter. It was too bad I had to choose as I still haven’t run all the way around the Horsetooth Reservoir (Colorado’s largest body of water), plus I hadn’t been able to run with that group of friends for a couple weeks now.

Then again, I hadn’t run with members of the Fort Collins Running Club in an even longer period of time.

It’s been four months since participating in the last T&H run and I was surprised to see almost two dozen runners at the start of this race. The weather was a bit colder (about 28 degrees Fahrenheit) than I expected as the high was forecast to be about 60F, and hence I decided to keep my windbreaker on for the race. I wish I had also brought some liner gloves as well, but it was warm enough to strip down to shorts.

In this fastest-start-last handicapped-style race, I started 3rd-to-the-last and tried a different strategy than usual. The last few months I’ve been working on lengthening my stride while still maintaining good form (e.g., not landing on my heels), and for this race I wanted to maintain a longer stride throughout the duration. So that I wouldn’t burn out too quickly, I also decided to run the first mile at a slightly slower cadence (e.g., 165-170 steps per minute) but then in the second half, pick up my cadence to my usual 180-185 steps/min.

I clocked in the first mile at 6:27 and thought, “so far so good.” By the halfway point my breathing and legs still felt good.

I also thought I was maintaining a pretty good rhythm in the second half (which was very slightly uphill, as compared to the first half which was very slightly downhill), but then made a tactical error: I continued to run quite a bit below my limits and never picked up the pace before it was too late! When I rounded a small bend on the Spring Creek Trail after 24 minutes and spotted the finish line, there was just 150 meters or so to go and still had quite a bit in the tank to go.

The upside was I was able to do a full-on sprint from that point which gave the other runners something to watch. The downside is I was probably capable of running the last mile maybe 20 seconds/mile faster.

Afterward, about half of the runners headed over to Gib’s for free breakfast, courtesy of the Fort Collins Running Club. That’s right, both the race and breakfast was free for FCRC members (best deal of any race in the country, I’m sure). It was another reason to pick this race today.

how was the breakfast??? ↩ Reply