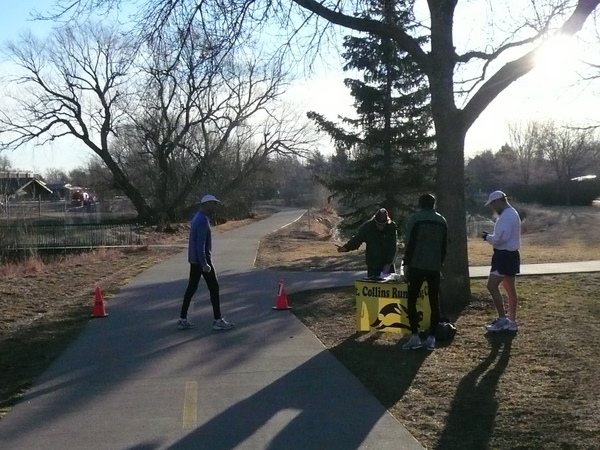 You would think that I’d run faster if I had people running after me like ax murderers, but in running races, I’ve seemed to have done better being the chaser than the chasee. At least the last time I had people start right after me in the fastest-people-go-last starts of the Tortoise & Hare Series of races put on by the Fort Collins Running Club, I was promptly caught and left for dead after just one mile.

This time at the start of the Spring Park 6k, I resolved things would be different. The morning was sunny and warm enough to run in a singlet and shorts, I’ve been running more than usual the last six weeks, and unlike the last T&H Race, I properly warmed up before my start time. And no less than three people were starting right after me: Sarah, at 5 seconds; Rick, at 10 seconds; and Steve, at 20 seconds.

Knowing that so many people would potentially be breathing down my neck soon, I took off at a frenzied pace, taking the shortest line on all curves and was pleased that Mile 1 passed in a respectable 6:18. I looked over my shoulder a few times. Where was Sarah? I must have opened up a fairly substantial gap.

That is, until I turned around at the halfway cone on the Spring Creek Trail, and then I saw her at maybe 20 seconds back. And there was Rick… and Steve too.

It turned out to be enough. With a mile to go, I looked behind me for one last time (and saw no one), and started catching and passing some of the folks who started before me. The Spring Creek trail would be considered flat by all but the most bump-in-the-road-averse people, but had enough four-feet-high undulations and curves to keep things interesting for my legs. Yet I had enough in reserve to do my trademark sprint the last 75 meters or so.

24:22 for 3.72 miles. Fifteen seconds faster than the same race almost exactly two years ago. At least I’m not getting slower.

The difference, this time, may very well have been due to the three runners chasing me down. Phew.

Those are some speedy splits! Congrats! ↩ Reply