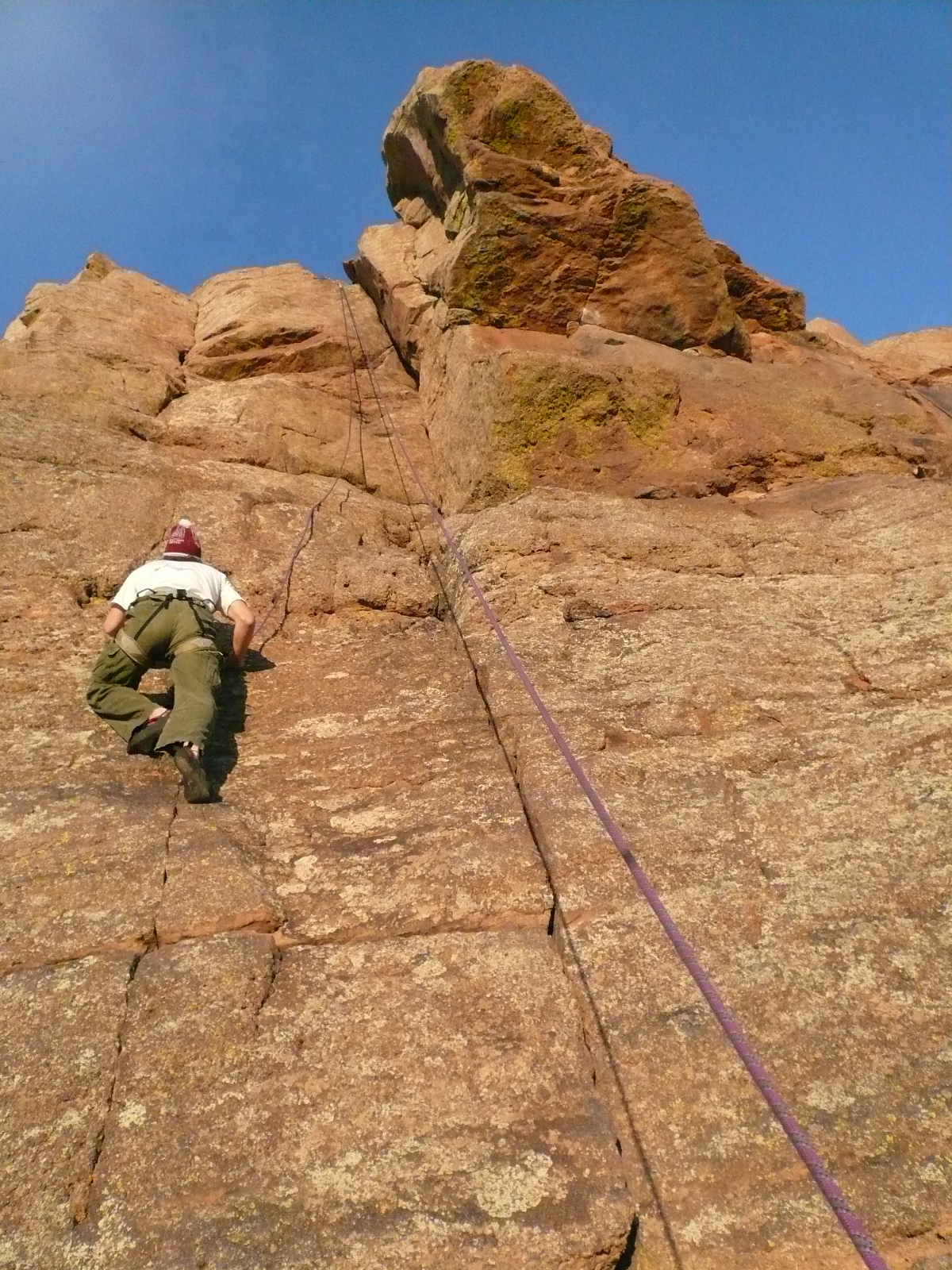 This very well could have been called the climb that almost didn’t happen. First, the weather guessers had called for high temperatures of about 40 degrees, but thankfully, the actual temperatures were closer to 60. This morning, the winds were also howling louder than a cowboy gone mad, but by afternoon, the air was so still that you could see dust particles suspended in the air.

Then, there was the issue of lining up rock climbing partners. Nick was still on, but wasn’t able to get ahold of Crayton and Morgan. Guess that’s what happens when we try to “play it by ear” and make the decision to climb outdoors with one hour to spare.

So at 4:15 p.m., it was just Nick and I at Duncan’s Ridge… and a few teenagers who were not climbing rocks, but throwing them. Meanwhile, we were looking for climbing routes that I could either setup a toprope for or lead. Fifteen minutes passed and we were just about to give up, until—aha!—I spotted two bolts. Turns out those were the only two bolts in the entire Duncan Ridge area, as confirmed by another climber named Buster who arrived 15 minutes after we did.

Buster had come alone (“it looked so beautiful outside today that I decided I had to climb even if by myself,” he explained), so I invited him to join us. That turned out particularly well since he also brought a rope and was able to set up an additional toprope (using three cams) to the right of ours that proved to be a lot more interesting. For example, instead of being a measly 5.6 or 5.7 that my bolted route seemed to be, Buster’s route featured some cracks, overhanging sections, and 5.9 moves.

The rock at Duncan’s Ridge was very nice—a conglomerate of minerals of sorts that provided lots of texture and little knobs that was great for smearing on (or crimping with one’s fingers if he was so inclined). It provided much more traction than the smooth rock across the street where Nick and I had bouldered last week. And the views here! With the Horsetooth Reservoir below and beyond, this was one of the most picturesque climbing spots I have been at, and it’s all within the same town that I live in.

Unfortunately, when I got home, I realized that in our haste to leave as night had befallen, I left the cordelette and carabiners I used as an anchor on the bolts. Whoops! I guess I’ll have to go back to fetch them in the morning before, er, someone else does. Ah, well—that gives me an excuse to take the Buell out for a spin. And to return to the climb that almost didn’t happen.

A map of where Duncan’s Ridge is located is here.